Baked quince with cinnamon and tahini: a light and fragrant dessert

Baked quince with cinnamon and tahini: a light and fragrant dessert 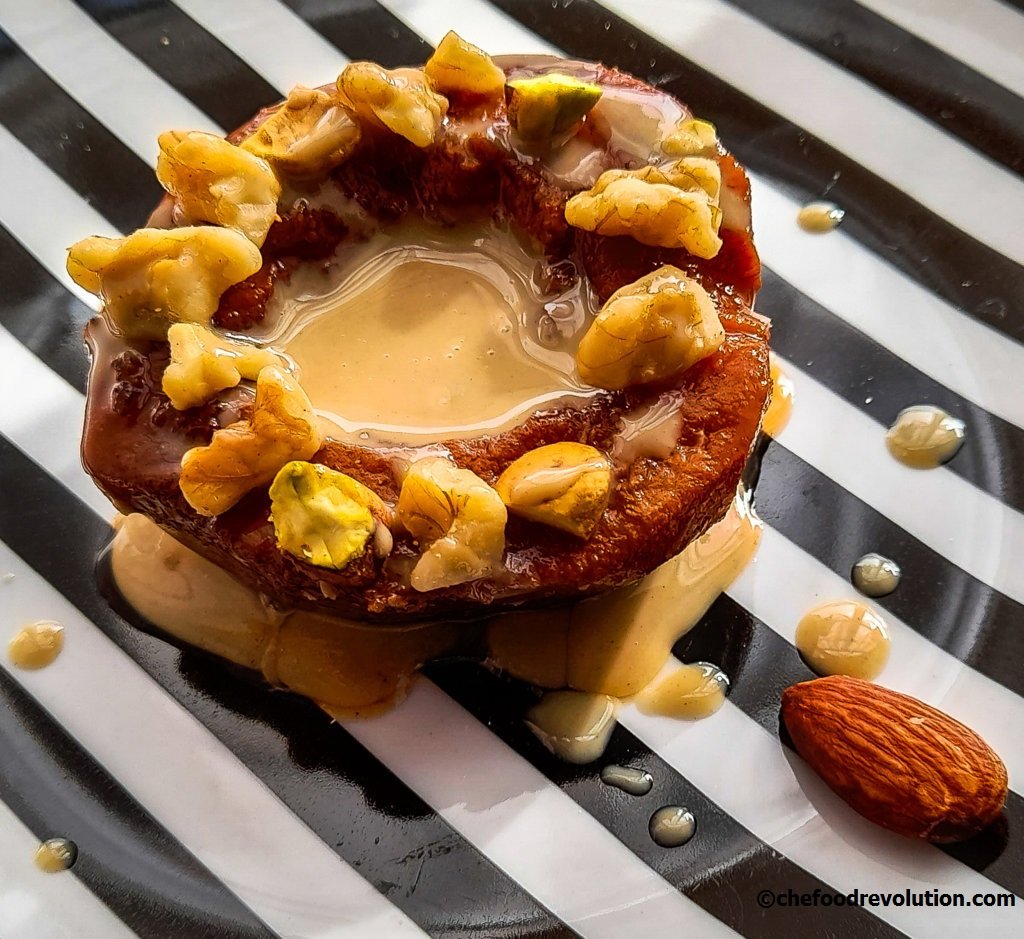 Unfortunately in many countries, quince is one of the forgotten fruits; in fact if you are used to go shopping in supermarkets, you will hardly meet it; while for some countries like Portugal and Turkey it still maintains its popularity.
Since the early days of autumn, the stalls in the markets of Istanbul are tinged with their tender color and “curvy” shape: it was no coincidence that in ancient times the quince was considered sacred fruit to Aphrodite, useful for fertility.
It can be consumed in many ways, cooked on the grill, in the form of jam to spread on bread or to enrich tarts, cookies, to make gummy candies, or even in liquid form such as herbal tea, or by fermenting it like wine and / or cider, but also in a natural way: in Turkey for example, we appreciate eating it as it is.
Quince is rich in dietary fiber, especially pectin. This characteristic, combined with its slightly sour (just thinking about it makes my mouth water!) and not very sweet taste, makes it an ideal fruit for those who want to lose pounds or keep blood sugar levels at bay.
It is rich in vitamins A, B, E and in particular vitamin C; with plenty of polyphenolic compounds and mineral salts such as potassium, calcium, iron and phosphorus.
Useful in facilitating intestinal motility, but also in the treatment of gastric ulcers.
Its precious antioxidants (catechins and epicatechins) are valuable allies against the growth of colon and kidney cancer cells.
A true nutraceutical, as not only the fruit but also its skin, leaves and even seeds are providential.
In particular, the seeds contain mucilage (just like okra: if you want to know more click here), which in addition to offering benefits for the skin (if used in the form of a topical gel, after soaking for 24 hours), they are also used to relieve cough and sore throat if assumed as an infusion.
However, I recommend moderation: no more than 2-3 seeds per person/day; just like apricot or plum seeds, when not ripe, they contain amygdalin, which contains cyanide.

So, with due care, I really think we should include quinces in our diet.

for garnishing (every half baked quince)

Wash the quinces, peel them and then cut them in two. Remove the central part containing the seeds but do not throw away either the seeds or the peels.
Put water in a large container and squeeze the juice from a lemon. Place the peeled quinces inside the solution to prevent them from oxidizing with air.
Once the cleaning operation is finished, in a thick-bottomed pot (like a solid pressure cooker, for example) place the peels first and then lay halved quinces on top of them: it will be a long and moreover with little water cooking, in this way we will avoid burning them from the bottom.
In a container mix the water, honey, seeds and flavors, then divide the liquid on the half quinces that you have placed on the peels.
After about 40 minutes (20 minutes in the case of the pressure cooker) the quinces will have softened enough.

At this point you have two options:

– transfer them into an ovenproof dish, distributing the cooking liquid equally over the quinces; bake in a hot oven at 180 degrees for another 30 minutes.

– proceed without oven; try to carefully turn the quinces inside the pot (over the peels) and cook for another 25-30 minutes with the lid firmly closed. If during cooking you see that the water has evaporated completely, you can add a few tablespoons of hot water.

Baked quince which is prepared following this recipe, so with a reduced dose of sugar, is quite dietetic.) And this represents an excellent alternative for those metabolisms slowed down because of the winter, compared to sweets made with too much fat and too many refined carbohydrates.
My mom, on the other hand, normally uses a double dose of honey; in addition, she sometimes adds a puree made from two grated apples; this is sweetened with 2 extra tablespoons of honey, cinnamon and pieces of dried nuts; the puree then goes to the center of the quince.
If you think you deserve it, you can try it too. Or for a traditional touch just add kaymak, a kind of very solid milk cream; or a scoop of vanilla ice cream or if you are on a diet some tablespoons of yogurt. Finally, the last variant (but that depends only on your culinary fantasy) you can try them as the Ancient Romans did: with a spoonful of dried nuts like walnuts or hazelnuts.
The alliance between fruit (or desserts made with fruit) and sources of fat (like tahini, ice cream or even yogurt), in addition to making the dish in question delicious, also serves to slow down digestion – which otherwise would happen quickly given the presence of only simple carbohydrates – and therefore to limit the dizzying escalation of glycaemia peaks.
Therefore, keeping the quantities at bay (remember that increasing calories and indigestion are not part of our ambitions) you can extend this strategy to similar situations. A practical example is to consume the fruit that you have for snack, together with some dried nuts (walnuts, almonds or other); it is true that in this way the calories introduced increase, but at the same time it will also increase the sense of satiety, thus arriving at the next meal with less hunger and less likely to overeat (see also CHEtarian diet).

Enjoy your dessert and good revolution to everyone