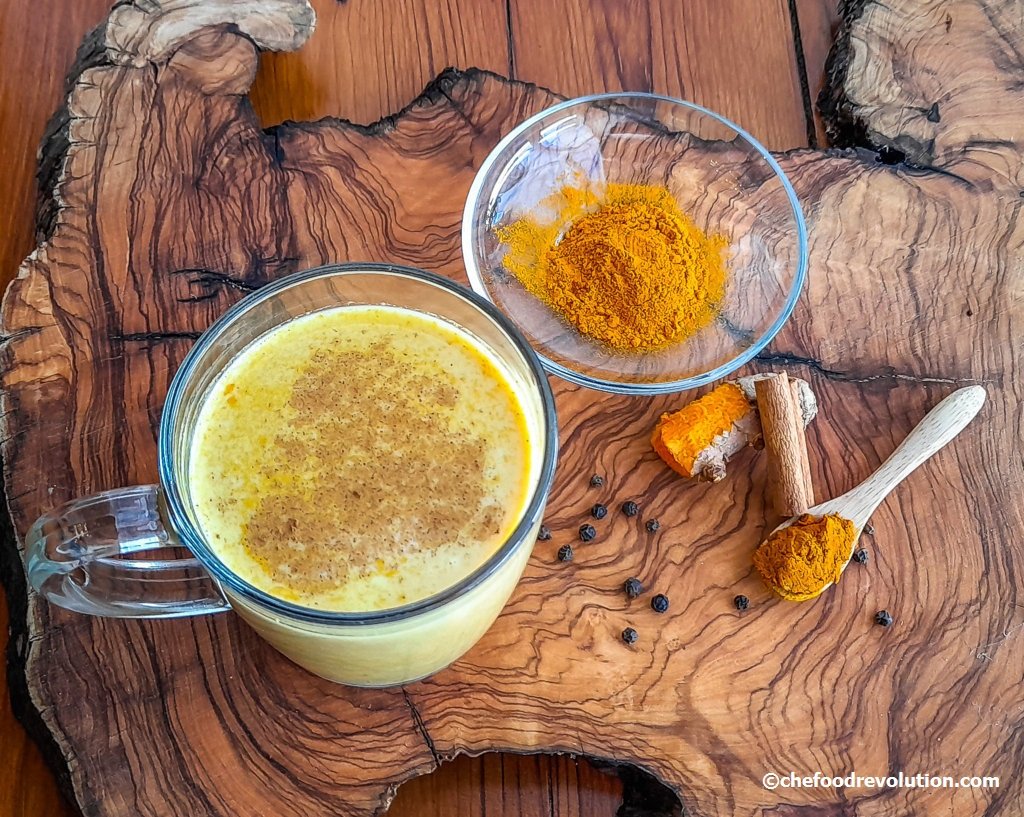 Golden Milk is difficult to categorize; a tasteful drink to enjoy or a powerful remedy that everyone should know about?
The main ingredient of Golden Milk, turmeric (Curcuma longa), has extraordinary health properties due to the curcumin and other phytoconstituents present.
Ever since the West became aware of the use of these rhizomes in Traditional Oriental Medicine, more and more funds have been available to finance research into their therapeutic properties: anti-inflammatory, antioxidant, anti-mutagenic, anti-diabetic, antibacterial, hepatoprotective, expectorant and even anti-cancer.

But beyond the health aspects, I personally love Golden Milk so much that I drink it regardless of my health or the season: steaming in winter, with a few ice cubes in summer, always good and always functional.

What does Golden Milk mean?

If you like, they are the stage names given by Westerners to the potent Ayurvedic remedy of Indian origin: Haldi Doodh (as it is called in North India) or Turmeric Drink, which can sometimes sound unappealing to many.
Although the name Golden Milk is a relatively recent name, it’s certainly not far-fetched: thanks to the presence of turmeric, which is rich in orange colored pigments, the thick liquid in the cup gets a shimmering golden sheen.

What benefits does Golden Milk offer and how?

As mentioned above, Golden Milk has been used in India for centuries as a cure-all for various ailments, and over the last 40 years the western scientific community has been devoting enormous funds and support to scientific research into its actual pharmacological activities.
Here are some of the many scientifically approved benefits of curcumin, turmeric’s main therapeutic molecule:

– it is a powerful antiseptic and antibacterial – when we are debilitated, the perfect balance of microorganisms in the body is upset, encouraging the growth of pathogenic bacteria or viruses. Taking turmeric is very helpful in restoring lost harmony [1,2,3] and quickly eliminating the symptoms of illness;

– is rich in antioxidants – useful not only in fighting free radicals but also in stimulating the body’s own antioxidant mechanism [4,5];

– it has anti-cancer properties [6, 7, 8, 9, 10] – especially for cancers of the colon, breast and prostate, skin and leukemia; of course, scientific conclusions of this magnitude would require more studies, including more participants and over longer periods; but at the same time, we cannot deny the correlation between the antioxidant property and therefore the anti-cancer effect;

– is a hepatoprotector (protects liver health) [11,12] – and also acts as an antidiabetic and hypolipidemic [13];

– is an incredible anti-inflammatory – curcumin can inhibit a large number of different molecules involved in inflammation, including phospholipase, lipoxygenase, prostaglandins, collagenase, elastase and many others [14, 15]; becoming a great ally against various disorders such as arthritis and rheumatoid arthritis, which are very difficult to treat;

– and among other things very useful in maintaining a healthy life, its antidepressant capacity should certainly be highlighted; and clearly by stimulating the production of serotonin, it facilitates sleep and improves mood [16, 17].

I don’t know if it works in the same way for everyone, but I can share my experience: some time ago, after a difficult dental extraction, I cured a terrible inflammation with Golden Milk! Since that day, whenever I feel something wrong with my body, I enjoy a big glass of Golden Milk: the feeling of relief is real and quick; I don’t think it’s a simple coincidence or self-convince, because just take a look at the bibliography in this article or do a search on the web to understand how formidable this superfood really is.

Do you know the difference between a prebiotic and a probiotic?
If so, do you know which foods are rich in them?
And do you know that you can prepare them at home without spending a fortune?

The western world has not only changed the name of this drink, but also the recipe.
The original formula for Haldi Doodh (or Haldi Ka Doodh – Hot Turmeric Drink) is really simple and the ingredients are readily available to anyone:
– 1 tablespoon of turmeric powder to be dissolved in hot milk, or tea, or even hot water
– possibly add honey
That’s all.

for sweetening and flavoring

In the ingredients I have mentioned you will find a few extras, including oil and black pepper. While it is true that Golden Milk has protected the Indian people from disease for centuries through the simple formulation above, modern science teaches us that adding (in particular) these two very readily available components can only enhance the effect to an exponential level.
Therefore, black pepper and oil are only optional if you want to drink Golden Milk just for its taste; otherwise, as mentioned, for a real therapeutic effect, you absolutely must add them:

– black pepper which, thanks to its synergistic effect, will double the benefits of turmeric;

– oil (or other fats) to access the fat-soluble antioxidants present in this elixir;

Bring the milk or plant-based drink of your choice to the boil.
As soon as the milk begins to boil, turn off the heat and add all the ingredients, stirring them well with a spoon, or, for a velvety effect, using a milk frother: the Golden Milk is ready to be enjoyed.

If you have used fresh turmeric, do not forget to strain the golden milk before adding the other ingredients.

If you have become a frequent user of Golden Milk, or perhaps you would like to try the ayurvedic therapy of taking it for 40 consecutive days, you will appreciate the more practical method: prepare the turmeric paste in advance in large quantities, which you can use conveniently when needed.

Put the turmeric powder in a small saucepan; stir with a spoon; slowly pour in the water until you have a thick but still liquid paste (so add more water if necessary).
When it starts to boil, add the black pepper together with the fat/oil of your choice; mix well and cook the turmeric paste for about 7-8 minutes over a gentle heat.
Pour the turmeric paste into a glass jar with a lid. Once it has cooled down to room temperature, place it in the fridge: it will keep for up to 2 week

for sweetening and flavoring

Bring the milk to the boil, add in a teaspoon of turmeric paste and mix well with the other ingredients.

In case you have used fresh turmeric, don’t forget to strain the golden milk before adding the other ingredients.

Prepare the Golden Milk in advance according to recipe 1 or 2, using hot milk. After cooling it to room temperature, place it in the fridge for 2 hours and/or add ice cubes.

Using hot milk is useful for increasing the solubility of nutraceutical molecules, in this way the miracle drink can help alleviate various ailments, so don’t think of cheating by using cold milk directly!

Living forever is not possible, but living well very often depends on us and what we eat

Have a good life and good revolution to you all