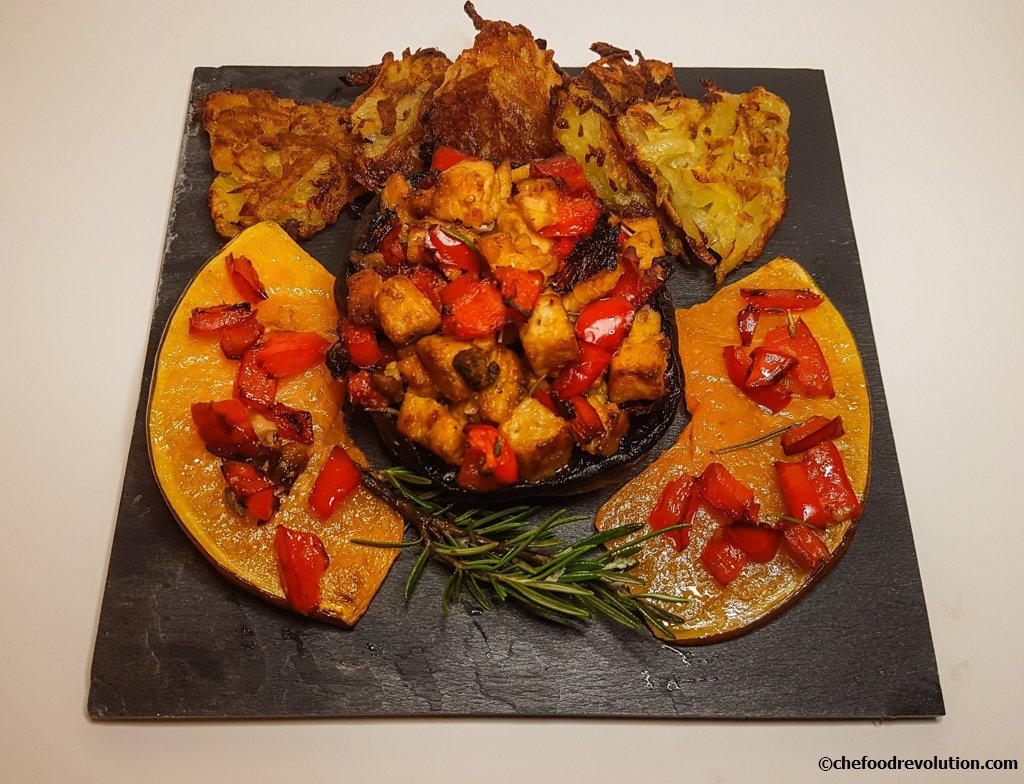 Since we are now officially in autumn, it seems to me that we should talk about some food with a forest flavor, such as mushrooms.
While the temperatures decreasing and humidity increasing, nature offers us one of its most miraculous ‘fruits’. His Majesty “Boletus Edulis”, alias porcini, just to name one, is peeping out these days. We all know that if you are not a true expert, hunting for mushrooms can also be fatal, so it would be advisable and more intelligent to buy them from a certified seller. However, in that case it could be ‘fatal’ for their price, for many budgets like mine.
Here then comes into action CHEfoodrevolution’s motto, “I won’t leave anyone behind”; in fact I try to find a solution for all problems, including those relative to the budget: if we use a nice portobello mushroom, taking advantage of its similarity to its “noble” cousin, and add to the recipe a very proletarian package of dried porcini mushrooms, we can feel closer to Nirvana in the same way.
Regarding proletarianism, it must be said that mushrooms have always been considered as the meat of the poor, or more modernly as valid meat-substitutes for vegans and vegetarians.
In addition to having a good percentage of protein, their success is due to their structure, palatability and chewability, a cocktail that recalls the characteristics of a stew. Moreover, the fortified taste of dried porcini mushrooms, naturally umami, plays its role as a flavour enhancer of the other ingredients present; all this translates into a refined and satisfying experience in various aspects, not only nutritional, for the lucky taster.
To complete the dish the Delica pumpkin, which in addition to embellishing the dish with its bright orange-yellow, also gives a good dose of carotene, with anti-inflammatory and antioxidant properties, particularly useful during the change of season, that is when the body may need an extra boost.
The recipe for stuffed portobello mushrooms is therefore a joy for the eyes and palate; balanced with nutrients but also with the seasonality of the ingredients. It is a cheap, healthy and as usual ethical dish.
In addition, anyone can prepare it: in fact, in the photo you can admire a sample made by my husband, notoriously far from being an expert, who simply followed my instructions.

For this very rich and nutritious recipe of stuffed portobello mushrooms, first you soak the porcini mushrooms and immediately after turn on the oven and set it to 200°C. While the oven heats up, you grate the two potatoes. In a frying pan cook for about 5 minutes the shallot thinly cut together with the “filaments” of potatoes, a little oil, salt, pepper and a few pieces of rosemary; then prepare the rösti with the help of a round pastry cup, for a classic shape (if you don’t have the triangular one it’s ok anyway), on a baking pan lined with baking paper; bake them without waiting until the temperature is reached: this last step, harmful for baked goods such as bread or desserts, in the case of vegetables there is no contraindication and on the contrary you save energy, so money for the bill and production of greenhouse gases.

Rösti, although have ‘Swiss’ origins, are prepared all over the world. As you know in the classic ones you can find cheese, speck, bacon or other “little things” not exactly very innocent for the excess kilos or sustainability. On the other hand, it must be said that if you love potatoes you won’t need any other extras; at the end of cooking you can add some mustard, combined with natural yogurt to give an extra quid to their enchanting sweetness.
Also, if you like a softer texture, you can boil the potatoes for about 10-15 minutes before grating them. In this case, however, you should consider some extra time (about two or three hours in the fridge) to let them cool and harden so that they can be handled and grated

Without wasting time, clean the mushrooms with a dampened paper towel; cut the pumpkin slices in two, better if not higher than 1 cm; cut the half bell pepper into cubes, lightly oil the vegetables and mushrooms and put everything together in an oiled baking pan; then bake it too. If your oven does not have the rails for 2 pans properly spaced, you can continue cooking rösti cakes in a pan.

In the meantime, cut the tempeh (or whatever you want to use) into cubes and cook them in a lightly oiled frying pan over high heat, together with the dried porcini mushrooms.

After about 10 minutes of cooking take out of the oven the cubes of bell pepper, except for a spoon that will be used as decoration; with a mini pimer transform them into a purée, with which to fill the portobello mushrooms; then lay the cubes of porcini mushroom flavoured tempeh on top. Finally garnish them with the remaining cubes of peppers. Serve your dish by combining the stuffed portobello mushrooms with Delica pumpkin slices and crispy rösti to complete all the colors of autumn.

Enjoy your dinner and good revolution to all