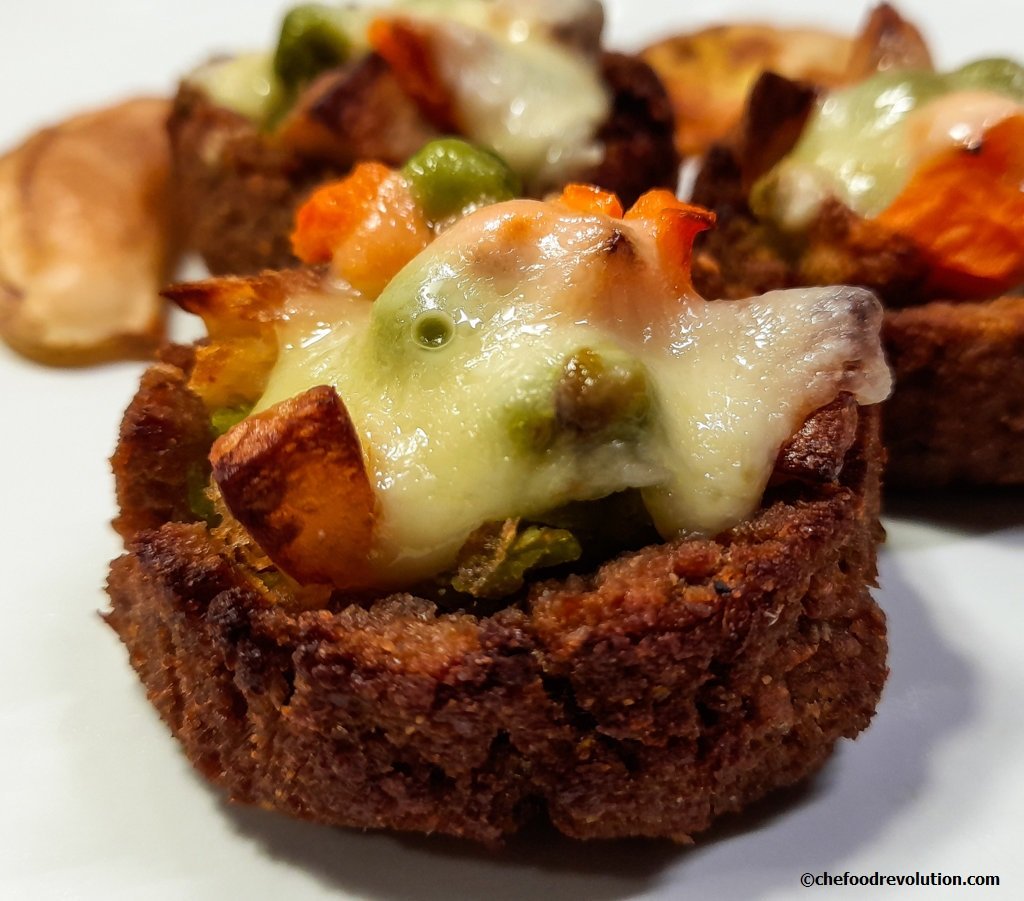 I confess that when seen in its packaging, soy mince doesn’t look inviting at all; but by now you will have realized that in the kitchen of CHE, with a little imagination and willingness, we can do great things: like transforming a most likely “dog food”, into elegant veggies stuffed soya mince baskets.
This is actually a reinterpretation of a recipe from my childhood days… yes, unfortunately very dèmodè. My mother used to prepare these baskets for special occasions, but using minced meat and lots of vegetables. Presence of veggies was a cunning strategy: apart form giving those simple (also definable as banal) meatballs a magnificent flavor and a very scenic appearance, also allowed my mom to serve an affordable meal: something not negligible for two young teachers (40 years ago the price of meat was much higher than 5 euros per kilo!).
Unfortunately, much has changed since then; the quality of life and healthy eating habits have decreased: we have quickly traded the little but good, with the abundance of food of dubious origin.
The ever-increasing number of intensive livestock food products are playing havoc with the health of animals and consequently with the health of consumers – us. Herbivores are fed with anything but hay; they are bombarded with antibiotics (even those of last resort) to get them healthy to the day of slaughter (see here the details), and paradoxically sold to us as a panacea for health. As a result, over the past 40 years, the number of people who have decided to reduce or eliminate meat consumption, for the love of animals and / or of themselves, has increased significantly, and with that, so has the interest in the new generation of vegetable proteins.
To be more specific, the proteins or minerals boasted by meat can be found in nature in various plant-based food alternatives, but the chewability and elastic structure which derives from muscle fibers and connective tissue, cannot be obtained from legumes, simply by cooking them.
As mentioned, this is now an important part of the market and to fill this gap and make the diets varied, food products have been developed that despite being 100% vegetable, are able to replicate even the memories of the beginner dealing with the transition (see meat analogs).
So here I am talking about the soya granules in other words textured vegetable proteins (TVP), which I am going to use to create the stuffed soya mince baskets. In the 1970s, soy protein was seen as “mystery meat”[1], a disparaging term used for meat products that have an unidentifiable source; whereas today we find it on the list of most popular ingredients because of its ability to contribute to two prominent food trends: the ongoing search for high-quality, low-fat foods, and the burgeoning field of functional and nutraceutical foods. Textured vegetable proteins have a PER (protein efficiency rate, which is the parameter to indicate, under standard nutritional conditions, the weight gain in grams for every gram of protein ingested by the subject: usually an animal) of at least 80% compared to milk (better referred as casein) [2], which puts them in a good position. Although the use of this ratio is questionable for the purpose of classifying the quality of proteins for human nutrition, given the studies based only on animals, it can be deduced that the combined intake of animal protein (30%) with vegetable protein (70%) increases the PER value, more than the consumption of animal or vegetable protein taken separately. Subjects who intend to reduce animal proteins can therefore reach higher PER values, thanks to a combination of animal and vegetable proteins compared to those who eat only animal proteins; just as I do in this recipe.
Applied to these foods, the terms “textured or texturized” mean the development of a physical structure that will give the consumer the sensation of meat.
The “orthodox” vegetarians or vegans consider it a sort of inconsistency, but personally I see nothing wrong with it, since I am more interested in the final goal: therefore, the possibility of revive “omnivorous sensations” to those who desire it is welcome.
Proof of this is the sequence of compliments I receive for this dish, from guests who are incredulous to their ears when I reveal my secret: yes, it is not meat.
Of course, just as it would be wrong for an omnivore to eat meat every day, it is equally wrong to eat meat substitutes at every meal of the week. The fact that they are plant-based does not give them the status of harmless: we are still talking about highly processed products. As a food engineer I can confirm: it is not natural that a food has “thermoplastic” characteristics. In fact, extruders, already known to the plastics and polymer industry, are used for this purpose: texturization takes place at very high temperatures, thanks to the high pressures reached in the extruders, in a very short time.
Texturized products are not natural, it is true, however at the moment there is no prohibition for their use; on the contrary the FDA has concluded that the consumption of 25 g of soy protein a day, as part of a diet low in saturated fat and cholesterol, may reduce the risk of heart disease and cholesterol[3]. My advice for you would be: just do what you do for other industrial and processed foods; which can be translated as – use always the common sense and moderation.
And as with almost anything, making meatballs or veggie baskets at home is certainly better than buying them ready-made. Aside from the reduced amount of salt, starch and fat which you can control carefully, they will contain no MSG, artificial flavors, thickeners or preservatives; they will cost much, much less; and they will have zero plastic to dispose of.

Obviously, it takes time to do it yourself, but if we are aiming at sustainability, we should accept some compromise… have a chat with your partner or talk to your friends on the phone while cooking: you will enjoy the best of both worlds.

1/3 cup peas and diced carrots and potatoes or sweet potatoes (use 1 tsp of olive oil to shine them)
1/2 cup peas to transform into puree (mixed with 1 tablespoon of tahin or gomasio, optional)
about 20 grams of string cheese for enrichment (or embellishment) to add in the last 5 minutes of cooking (vegans can use vegan cheese, or not put it in at all)

These baskets are easy to prepare even if they require some manual dexterity, but not master chef skills: the important thing is that you do not try to make them when you run out of time.

The first step in creating baskets with soy granules is to rehydrate them. Normally they absorb water in the measure of 2 or 3 times their weight. To do this, follow the instructions on the package. I usually use the cooking water of the peas, potato and carrot dices, flavored with 2 bay leaves; then I put a little less water than recommended (at most 2 times the weight of granules); in any case I squeeze them very thoroughly after the soaking time.
Once we have the useful amount of soybean mince, we can treat it as we would normally do with meat mince.
Combine all the ingredients for the baskets inside a bowl and mix well in order to obtain a homogeneous mixture: I use a food processor. Finally take some balls as big as a walnut; with your hands form some baskets deep enough to fill with the filling, without piercing the end. To make your hands less sticky, keep a bowl of water nearby to wet them as needed.
Place the baskets in a baking dish lined with lightly oiled baking paper. 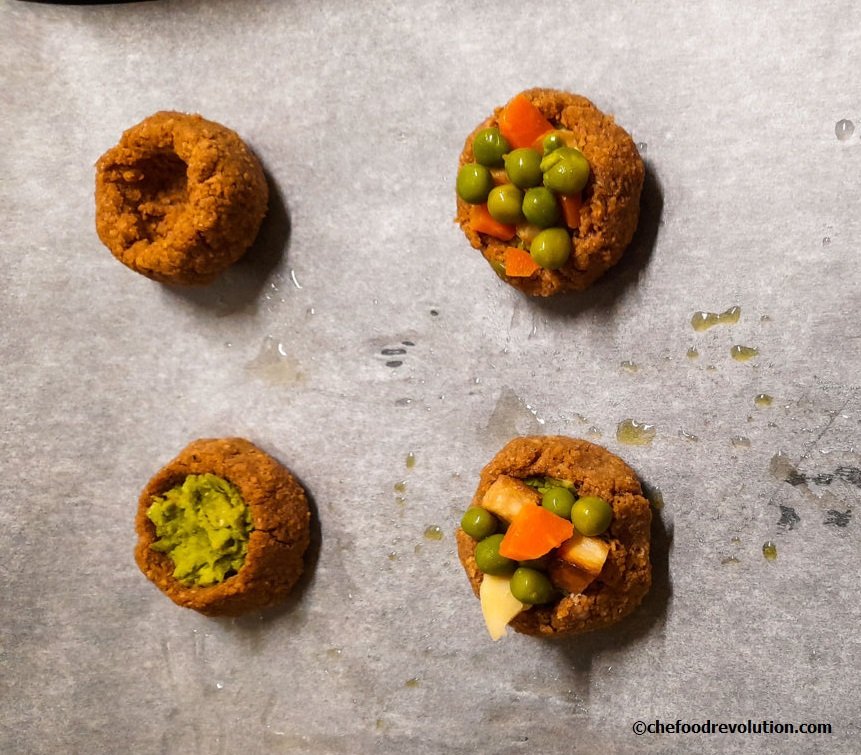 Meanwhile, turn on the oven and set the temperature to 200 °C.
Lightly oil the inside of the baskets and fill them with about 1 tablespoon of pea puree, optionally processed with tahini or gomasio.

The addition of tahin, besides strengthening the taste in an exponential way, also serves to improve the quality of the protein content of soybean. In fact there are all the essential amino acids, including lysine at optimal levels; whereas methionine is the most limiting amino acid. The tahin (or tahina), or sesame puree, (you can also prepare it at home: here is the procedure) is rich in methionine, as are the egg and cheese used in this delicious recipe. If you are vegan, add another tablespoon of tahini without thinking twice (being careful to the salt content, in case you are using gomasio)

On top of the puree place a tablespoon from the potato, carrot and pea mix. Bake the veggies stuffed soya mince baskets for 15-20 minutes (check the cooking time because each oven has its own story); after that time add cheese garnish on top of each basket and bake again for another 5 minutes on the grill function. Voilà, they are ready to delight your guests.

It’s a dish that’s already packed with nutrients, but in case you’re starving, try serving a soup before; maybe a creamy and tasty mushroom soup like the one suggested by CHE (you can find the recipe here).

Honestly, this rather complete dish is missing one thing: vitamin C. I recommend combining it with a salad rich in carotene and vitamin C (here is an example) both to facilitate the absorption of iron(5) and to satiate your guests, but without making them feel heavy. Still not enough for you? Then add 2 tablespoons of hummus, rich in tahini (therefore methionine) and a satiating power (for the original recipe of hummus click here)

Enjoy your dinner and happy revolution to all