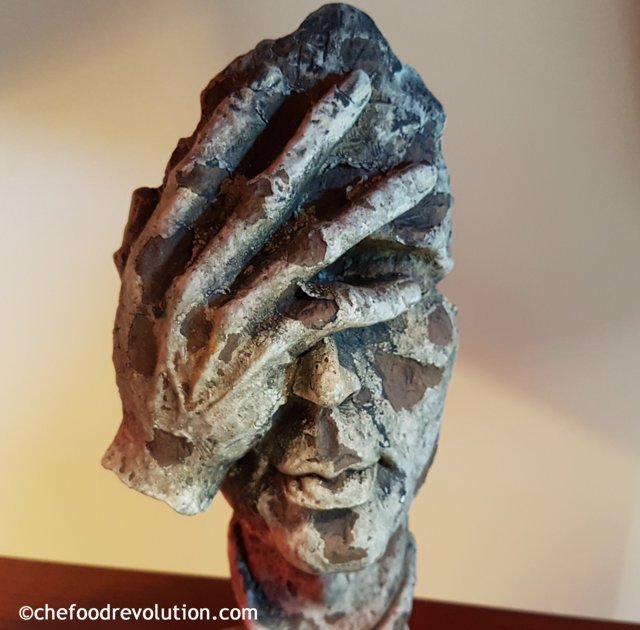 Sad to note that while in the days of the ancient Greeks, excess food was despised and seen as a weakness, the thousands of years of social, economic or cultural development have failed to add a shred of evolution to our situation: on the contrary, we are more lavish than ever, perhaps even more so than the ancient Romans: whose opulence is history, but who certainly couldn’t even pose the problem of food consumerism.
Man has not always been like that, this seed has been very cleverly introduced to us over the centuries. Karl Marx, for example, saw consumerism as a “fetishism of the commodity”, and we must reflect on the fact that when he wrote Das Kapital back in 1870 there was not even the embryo of a society based on consumption, compared to today. He was fiercely criticizing the wealth and consequently the product created by an alienated work, because the man who produced it, in turn, had been alienated by the same product he generated: not being able to afford to buy it. Today in the industrialized world, few goods are not achievable by man. Almost all families have at least one car, one or more televisions, household appliances, clothes, smart mobile phones, obviously within the reach of those who produce them. And, apparently, we are much happier!

It’s a known fact. This can be traced, by the statistics on the equally growing consumption of anxiolytics and antidepressants… we are, of course, happier. Going back to Marx’s vision, we had to wait more than half a century to see consumerism penetrate into non-essential goods. But when it came, there was no escape for anyone. The “great” minds were immediately aware of its devious and comforting character; a bit like the forbidden apple: once tasted, infatuated forever. The American economist Victor Lebow expressed his views in the following words: “Our extremely productive economy requires us to make consumerism our way of life […] We need things that would be consumed, destroyed, worn out, replaced and thrown away at an ever-increasing rate. We need people to eat, drink, dress, drive, live, in a consumerism that is increasingly complicated and, consequently, more and more expensive”. And it was just like that: as it was foreseen back in 1955, we lost control over our actions, becoming easily maneuverable through the diffusion and acceptance (by television, advertising) of this new lifestyle. Most of us squeeze out their existence, yearning for the ultimate status symbol; it is an ‘atypical monster’, which does not frighten people, but rather seduces them. The monster is in houses, on tables and even in our dreams, but we can’t see it.

Our civilization – if we can still call it so – produces 40% above its sustainable capacity. To keep our foot on the accelerator at all times, we need to feed this hyper production with the planet’s resources. Minerals, metals, fossil fuels and biomass: their extraction generates hydro geological changes (in terms of biodiversity and landscape), and soil degradation; moreover, during utilization and transformation stages in the various production processes, emissions are released into the air and water, which together with waste and dissipative losses, contribute to climate change, eutrophication and acidification of soil, water and air. Deforestation to make way for new arable land and urbanization, extinction of many animal and plant species complete an already congested scenario.

And abovementioned actions exist, in order to support a system based on hyper-consumption, as we are hyper-producing, or vice versa, nobody knows. In principle, supply must be born from demand, but since we have been pushed by producers and governments to adopt a specific way of life, we can state the opposite, that demand is born from the abundance of supply.

And let us come to palpable facts in the everyday life of man.

I want to present you some numbers that the WHO (World Health Organization) issues periodically for what is defined as the new plague of humanity: obesity. Today more than 2 billion people in the world can be defined as overweight, and 700 million of them have exceeded the threshold of obesity(1); at the same time 1 billion of world’s population are in the jaws of chronic hunger. Paradoxical, ‘excessive’ but unfortunately true numbers. Generated by those who occupy a space on the industrialized side of the globe, namely those who do not eat only to satisfy physiological needs. The weaknesses of the modern mankind feed the vicious circle constituted by hyper production and hyper consumption of food. To produce food in huge quantities, we need not only a large number of seeds, water, labor, but above all the soil itself, which should be highly fertile, but by now insufficient. Considering it a renewable source, such as the Sun, which stands there, emits heat and light, without our practices affecting its functioning, is a huge mistake.

The earth is a complex living organism, and to treat it like an equipment of an assembly line is a crime against humanity. To us, who are the children of the “Green Revolution”(2), no one has taught, that the earth does not belong only to humankind; no one has explained us, that we have borrowed it from future generations. It has been (and it is) a self-destructive ‘revolution’, which in time has had many updates; improvements in theory aimed at solving the question of world hunger, allowing the production rates of food in quantities never reached before, thanks to innovative, high technologies. Hunger in the world, however, continues to exist, and in addition we find ourselves with serious problems related to the pollution and shortage of primary resources (soil, water and air).

Andy Coghlan says that “(food) consumerism is eating the future”; in fact, we still don’t understand that meat dishes put on the table every day, rather than bread or biscuits thrown in the trash, because they are no longer crispy, have a heavy, unsustainable cost to to future generations.

I am of the opinion that first of all we should be aware of bad attitudes: this would be the first real weapon to start fighting our problems. Sooner or later we will realise, whether in a good or a bad way, how we have adopted a behaviour similar to that of fathers who squander all the family assets, condemning the descendants to hardship. But the good news is that the fate of how things will turn out, will depend exquisitely on us: choosing whether to improve ourselves or remain so, straight to the abyss, is only a choice, our choice.

Bibliography
(1) The GBD (Global Burden of Disease) 2015 Obesity Collaborators – “Health Effects of Overweight and Obesity in 195 Countries over 25 years,” study available on: http://www.nejm.org/doi/full/10.1056/NEJMoa16143627
(2)The Green Revolution, commissioned by industrialised countries in the second half of the 20th century, has allowed a tripling of harvests thanks to the use of new chemical products, fertilizers, mechanization, and hybrid varieties created with artificial selection techniques but altering the ecosystem and the balance of nature.