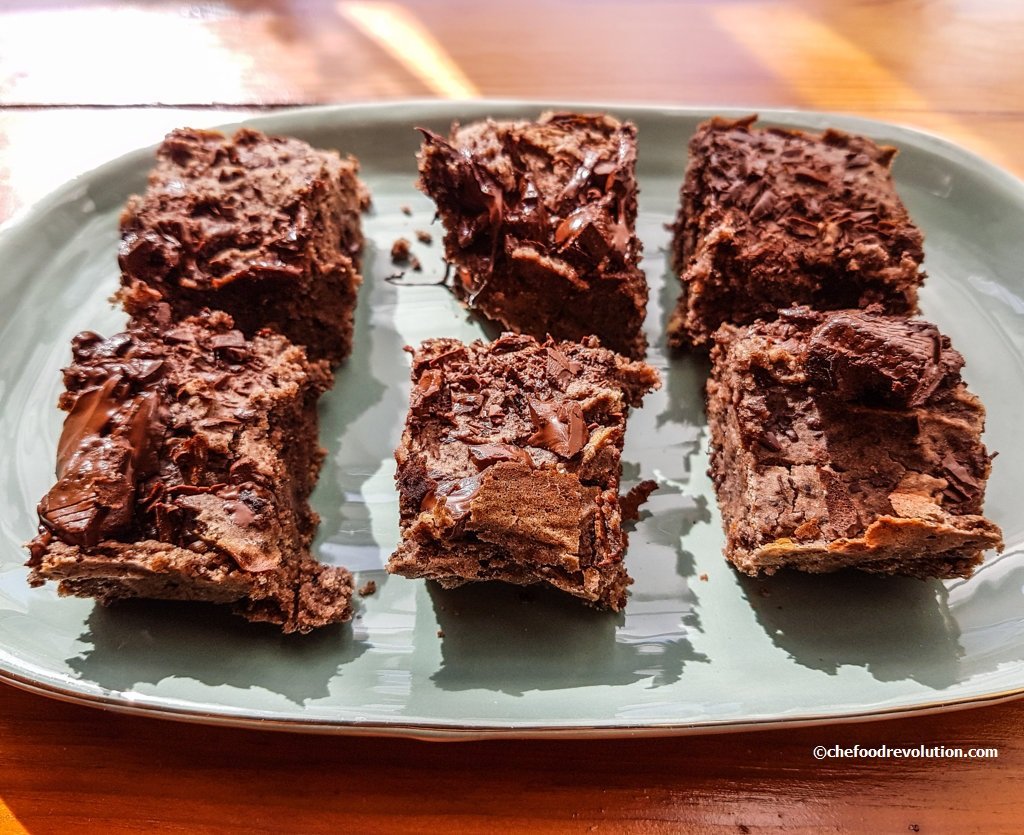 Personally I don’t like sweets, but for some of them like Brownies I’m a real sweet tooth. This brown colored – from which the name derives – “stars and stripes” recipe is used to make delicious, moist and chocolatey squares. I confess that the thing I prefer is their preparation, because the fragrance they give off during cooking has no equal.
They are both delicious and fragrant, but unfortunately they usually contain everything that is wrong with a healthy, ethical and balanced diet: too many calories, too many simple sugars, too much refined flour, too many saturated fats and too many eggs.
Now that you know me a little bit, it won’t be difficult for you to believe me if I tell you that I haven’t eaten a “classic” brownie in maybe 15 years: thanks to this astute substitution with black beans; I no longer feel guilty. Yes, you read right, it’s not the fault of T9: these wonderful Gluten Free Vegan Brownies are made with black beans.
My discovery of black bean brownies dates back when I moved to Portugal, where beans (dry or fresh) have a fundamental place in this cuisine, traditional and also poor: just my cup of tea!
One day some friends made me try a tart with a strange, but delicious cream; later I discovered that it was made with white beans. All my life my lack of imagination had prevented me from seeing them as suitable ingredients for a dessert. Instead they have everything you need, and even more: carbohydrates (very complex) and proteins (which far exceed those contained in the banal wheat flour). The passage from that first taste to the awareness of being able to make a healthy dessert, that would please me too, was just a moment.
Already from the first trials the suspicion shifted to faith: at the beginning I replaced the flour with beans, then butter with oil; not satisfied, I continued the experiments replacing eggs with rice flour. So the high percentage of fats and refined carbohydrates made way for protein and dietary fiber. In spite of the popular belief of “meat makes meat” – which in Italy means you will have muscles only if you eat muscles (meat) -, you should know that, although with a lower percentage, also beans make “meat”; so these Vegan Brownies of black beans step into another dimension: they are transformed from dispensing empty calories into a great snack even for the athlete or for those on a diet.

Now let’s analyze why it is ” smart ” this substitution

As I always say, never let legumes be lacking in the pantry, not only because they are affordable and have a long shelf life, but also as they represent one of the pillars of sustainable cooking; at the same time they succeed in being satisfying and satiating in a thousand and one recipes.
In fact, their versatile character is known to many populations on Earth: from Chinese to Africans, from South Americans to Mediterraneans.
Then they are available in every season: in winter the dry ones become undisputed sovereigns of tables giving life to soups and minestrone, reconciling us with the adverse climatic conditions; in summer, of course, fresh ones are preferred, with which to make quick, nutritious and refreshing salads.
Bean meatballs, burgers or patties are very good alternatives to those made with meat.
Rich in calcium, phosphorus, iron and potassium, the beans, are also nutraceuticals since they are a natural source of glucodrine (useful in lowering blood sugar levels) and lectin (equally useful for reducing the glycemic index of carbohydrate-rich foods, as well as acting as an antioxidant and even anti-cancer compound).
Furthermore, scientific studies associate regular consumption of legumes with a reduction in the risk of cardiovascular and metabolic diseases such as type 2 diabetes and obesity.
Having stated the characteristics and all the benefits, I would like to focus on another reason why I recommend this bizarre recipe: although we think we have seen plenty of unthinkable combinations in the world of gastronomy, observing the expressions of amazement of your guests when you reveal the “secret” ingredient of the dessert they are tasting with such passion, it is just priceless!

Ingredients (for a plum cake mold)

1,5 glass of black beans, already cooked and drained
3 tbsps rice flour (or 2 tbsps of ground flax seeds) + 2 tbsps vegetable milk
3 tbsps of sunflower oil or similar
2 tbsps of bitter cocoa powder
3 tbsps of brown sugar
1 tbsps of honey or grape molasses or maple syrup (you can also put only 3 tbsps of these liquid sweeteners instead of using a mixture with sugar)
1 tsp of cinnamon (if you prefer use vanilla)
5 tbsps of dark chocolate, cut with a knife (3 tbsps in the batter) 2 for decoration
½ tsp baking powder
A pinch of salt

For these vegan brownies of black bean, the first thing to do is switch on the oven at 180 degrees.
The preparation is rather quick, so immediately afterward put the black beans into a food processor and let it work until the beans become a puree: add all the other ingredients as you go ahead. 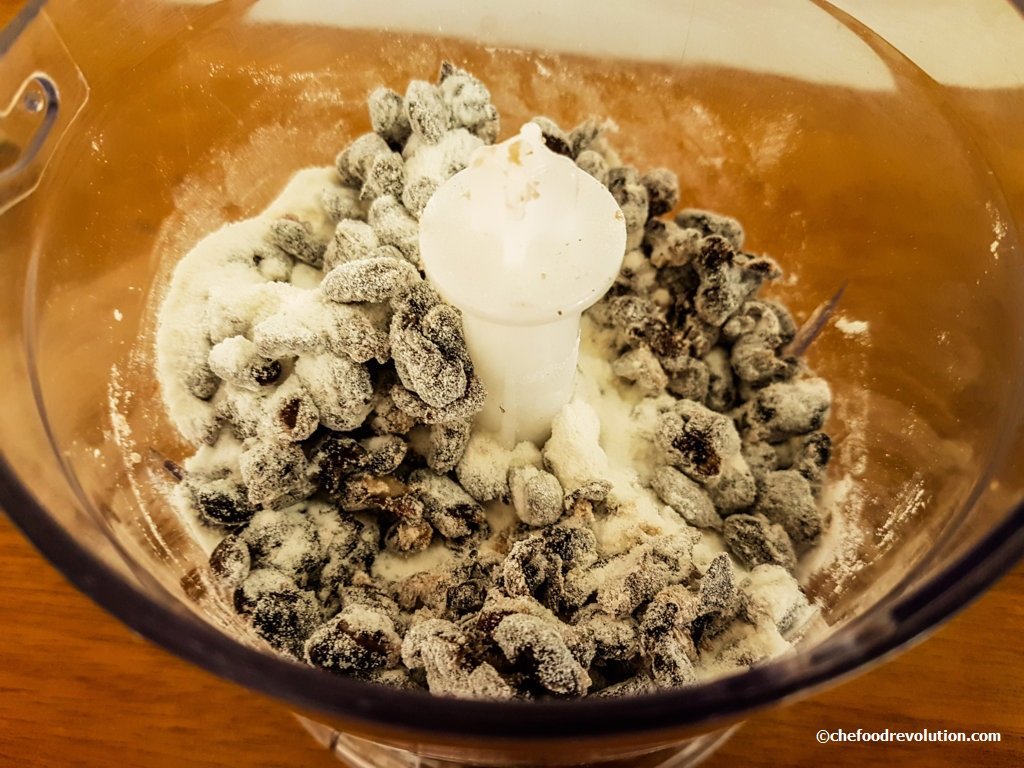 You have to obtain a dough as homogeneous as possible; to facilitate the work of your chopper every now and then open the lid, stir with a spoon and make it work: sometimes the ingredients stick to the edges and are not reached by the blades. 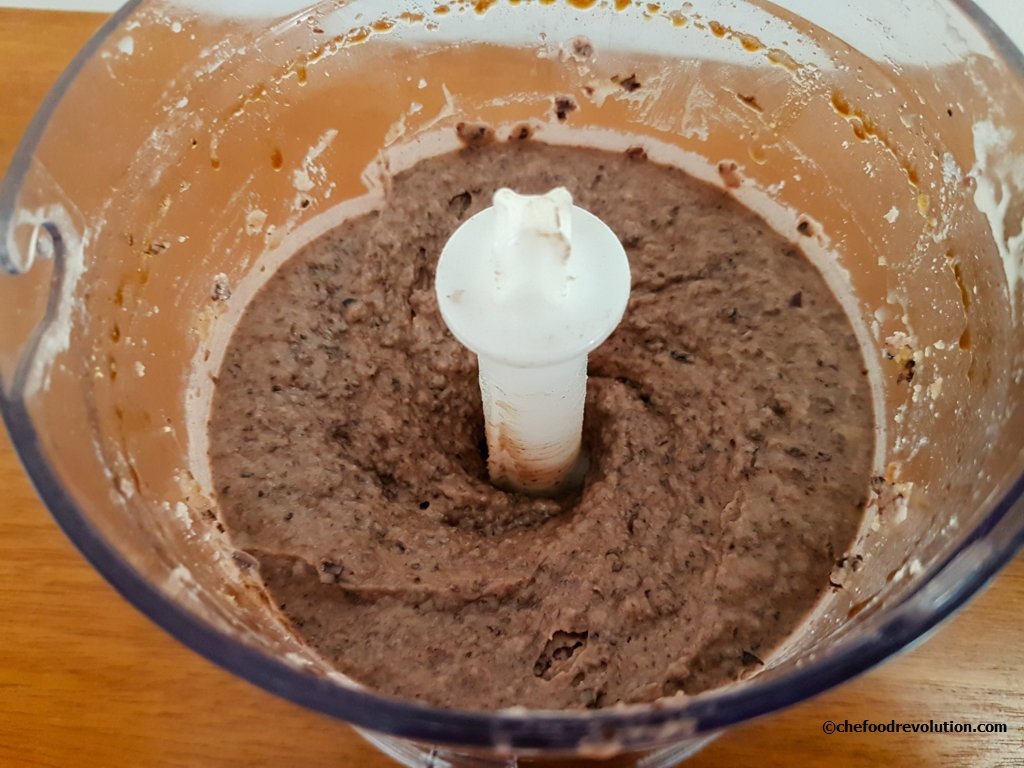 In the meantime prepare a plum cake mold (the example in the photo can be replaced with a more classic shape by using a 20×20 cm mold) by lining it with baking paper (or put some oil). Pour the dough into the mold, level it well then garnish with dark chocolate pieces that you cut before.
Bake for about 10 to 12 minutes. Caution: as cooking will continue once out of the oven, avoid cutting the portions too early; in other words, “severe penalties for those who succumb to temptation before 20 minutes”.

You don’t have to be traditionalist only when it suits you, so don’t tell me that the Brownies’ ideal companion is ice cream! It’s not a “who wants to be overweight” contest. We can enrich its flavor with the colors and scents of the fruit; but if you really want a cream to match, process the frozen fruit with a high-performance food processor; then add the natural yoghurt creating a very tasty, fast but also healthy ice-cream.

Enjoy your dessert and good revolution to all