Pasta and pressure cooker: myths to debunk for a more environmentalist way to cook

Pasta and pressure cooker: myths to debunk for a more environmentalist way to cook 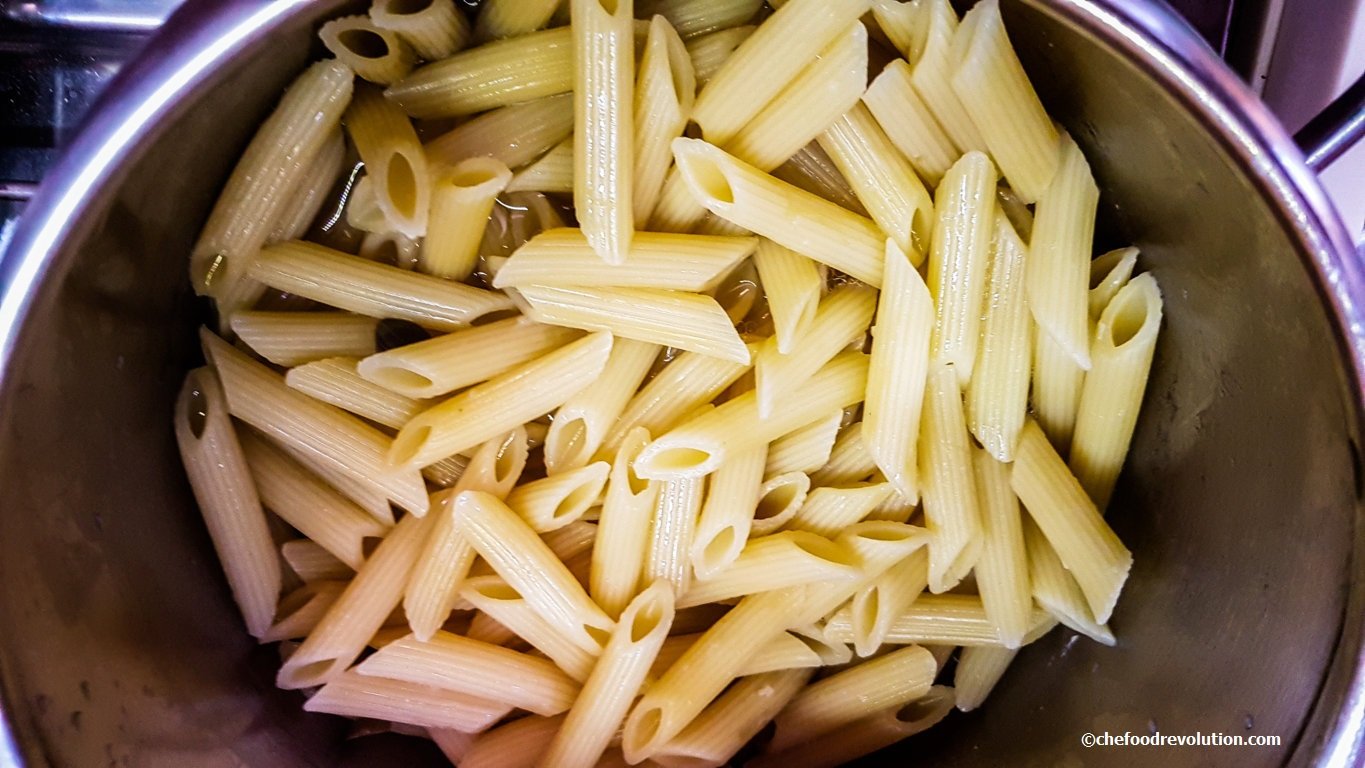 All populations know pasta, but few eat it as they should… according to Italians.
For a large part of the world’s inhabitants, the numbers present on the packaging which indicate time for cooking, mean nothing: I speak by personal experience.
While for an Italian, pasta is not only a food from which to obtain calories; it is not only made of water and durum wheat, but is seen as a religion and as such is venerated; therefore, the methods of preparation and cooking “adhere to strict divine laws”.
As a person who lived in Italy for 15 years, I must tell the truth: at the beginning I tried to fulfill all my ‘obligations’ without asking too many questions, but since I began to face a life of ‘hardship‘ on a sailboat, I had to revise my position: daring to modify the ritual of the pasta preparation methods.
In other words, cooking pasta using the pressure cooker and with little water.

To understand the alternative I propose, first let’s see what the original procedure implies

To cook a perfect Italian-style pasta, you need an excellent raw material (pasta), a large pot, liters of water, salt, an energy source (for stove) and, of course, a lot of time: in fact, the procedure consists of putting the water on the stove several tens of minutes before the lunchtime.
A large pot full of cold water at sea level, needs at least 10-20 minutes to boil. Disorganization in the timing or the delay of the diners make this time period double frequently. Then the water is salted abundantly and becomes ready to receive the “sacred divinity”.
The Italians may not be able to compete with the Swiss population in punctuality, but they are disarmingly accurate when it comes to cooking pasta perfectly al dente.
Now let’s see what happens inside the pot.

When we boil the water, we notice some changes from the first minutes: the bubbles. No, they do not announce the boiling, they are only bubbles of dissolved gases such as nitrogen, oxygen and CO2 present in the water. The boiling will still take some time and only an acute observer will notice the real sign of the expected boiling: formation of water vapor.
As the temperature increases, the bubbles, which are getting bigger and bigger, want to be transformed from liquid to gaseous form. Beyond temperature, the other determinant factor is pressure: as long as their internal pressure is not sufficient to equalize with the external pressure, boiling simply will not occur; therefore the process is not only conditioned by temperature, but temperature combined with pressure. We can say that water boils at a temperature when the vapor pressure in the bubbles is equal to the external pressure.
The importance of atmospheric pressure is a well-known factor, especially to those who have had to boil water at high altitude (as an ex mountaineer I know something about it!). About every 150 meters the boiling temperature drops of 0.5°C; therefore, aiming at the top of the Gran Sasso, if you would like to make some tea at about 2400 m of altitude, you will notice that the water boils at a lower temperature (about 90°C) because the pressure, compared to one at sea level, is lower (at high altitude there is less atmospheric pressure). Although it seems like an advantage, it really isn’t, because your tea will boil sooner, but it will be colder. With the consequence that it will take an eternity to cook things, like pasta: obtaining the necessary molecular transformations, it will take the molecules reach higher temperatures.
And so, especially at high altitudes, the use of the pressure cooker becomes almost an obligation; if you have limited time.
While for me, who lives a few centimeters above sea level most of the year, this simple technology is equally an obligation for other practical reasons like halving the cooking time, cooking water and consequently wasting less energy and creating less greenhouse gases. And I really recommend to all of you, independently at which altitude you live, to get the advantage of pressure cookers.
Having discussed the issues of pressure and boiling, let’s move on to the second point of the ritual: salting.

Salting or not salting, that’s the question!

According to Italian rules, once the water boils, you should add salt before pouring the pasta; I don’t know if it serves as an offering to the gods of pasta, but it certainly has nothing to do with science.
In order not to start endless and sterile discussions about the usefulness or not of this practice linked to perfect timing, when I am close to people intent on observing me with an inquisitive eye (like my very Italian mother-in-law) I add salt immediately after boiling. But I don’t normally add salt at all, and my husband adds salt in his plate as he desires.
The purpose of the operation is to salt the pasta of course, but there are also those who support that this step helps to increase the boiling point, so to make it easier cooking pasta. Actually, referring to the latter point, things are not really like that: to obtain an increase of only one degree Celsius, you should add huge amounts of salt: about 60 grams per liter. Considering that we normally use about 10 grams of salt for one liter of water, it is clear that this rule is useless for purposes different from organoleptic preferences.
But the point is always the same: do we need that salt?
Salt is essential for the human body, but our daily consumption is often above the recommendations. Because salt is found in almost all foods; in the case of pasta rarely is it eaten with just a drizzle of oil, and almost all sauces already contain high amounts of sodium chloride. It being understood that if you want to reduce the amount of salt from your diet, you must get rid of the moral obligation to salt pasta’s cooking water.

Our palate is very susceptible to it’s concentration, in fact if a certain food does not contain the same usual amount, it transmits to the brain a message such as “ALERT: NOT EATABLE FOOD”, causing an intense traffic of saltshaker on the table.
But believe me, reducing salt is possible and after a while the palate gets used to it, which is good: we all know that too much salt is bad for us, causing kidney fatigue, increased blood pressure and water retention

Intensive livestocksi: here are it’s devastating damages and solutions in order to change the route

At this point “the original rite of the ancient writings of pasta”, requires that the pot remains on the gas for as long as it takes to cook; then it is drained to add it to the sauce, serving it without wasting time. This is the procedure that is carried out in the houses of Italians, without exception.

Do you want to know how I cook pasta? Using a pressure cooker together with passive cooking

The procedure is very simple, fast and energy-saving: a good pressure cooker allows you to reduce cooking times by half and thanks to the passive cooking you save energy. Let’s see how.
I put the water inside my faithful pot – three quarters of the water that require traditional cooking procedures, often less -, close the lid and turn on the stove. After about 4-6 minutes, when the pressure cooker communicates me that it has reached boiling point, I turn it off; I open the lid (as soon as possible), and pour the pasta, close the lid, turning the stove on again; once it has reached again boiling point, I turn off the stove and put the timer at 1/3 of the time indicated on the package (for example, if 9 minutes are recommended for cooking, I taste it after 3 minutes and if it is not ready, I wait, using the residual heat and thanks to passive cooking principles).
If your pasta is overcooked at 1/3 of the time, the next time try to reduce it to ¼ (for 9 minutes of cooking time, 2 minutes of waiting would be enough) and so on. The individual tests are necessary for “tuning”, since I can’t give you a perfect timing, given the many variables involved: I cook for two people, you maybe should do it for four, I use one type of pot and you another, the brand of pasta is surely different from yours etc.
Moreover, I am not exactly a globetrotter, but I certainly cannot call myself a stationary person: During a year time, I eat the national pasta of at least 4 countries. Sometimes I notice abysmal differences: some pasta can be overcooked even if you turn off the stove at the first sign of the pressure cooker; other times it will take all the minutes indicated on the package and other times 1/3 of the time will return an excellent result.
I remind you that the greatest revolutions always require sacrifices, even if in this specific case talking about “sacrifice” is at least exaggerated.
Saving energy, therefore money but above all greenhouse gases are noteworthy goals and a civic duty, so do not give up in front of some failed experiment: the pasta al dente thus obtained will be even better, from every point of view.

Now that you know how to cook pasta perfectly with considerable savings at the end of the year, try making this delicious wholemeal pasta salad, even the most critical people will appreciate it.

Enjoy your pasta and good revolution to all

Article Name
Pasta and pressure cooker: myths to debunk for a more environmentalist way to cook
Description
Cooking pasta with the pressure cooker makes us more eco-sustainable: this is the right way not to lose anything in quality and taste
Author
Başak Bartu
Publisher Name
CHE Food Revolution
Publisher Logo