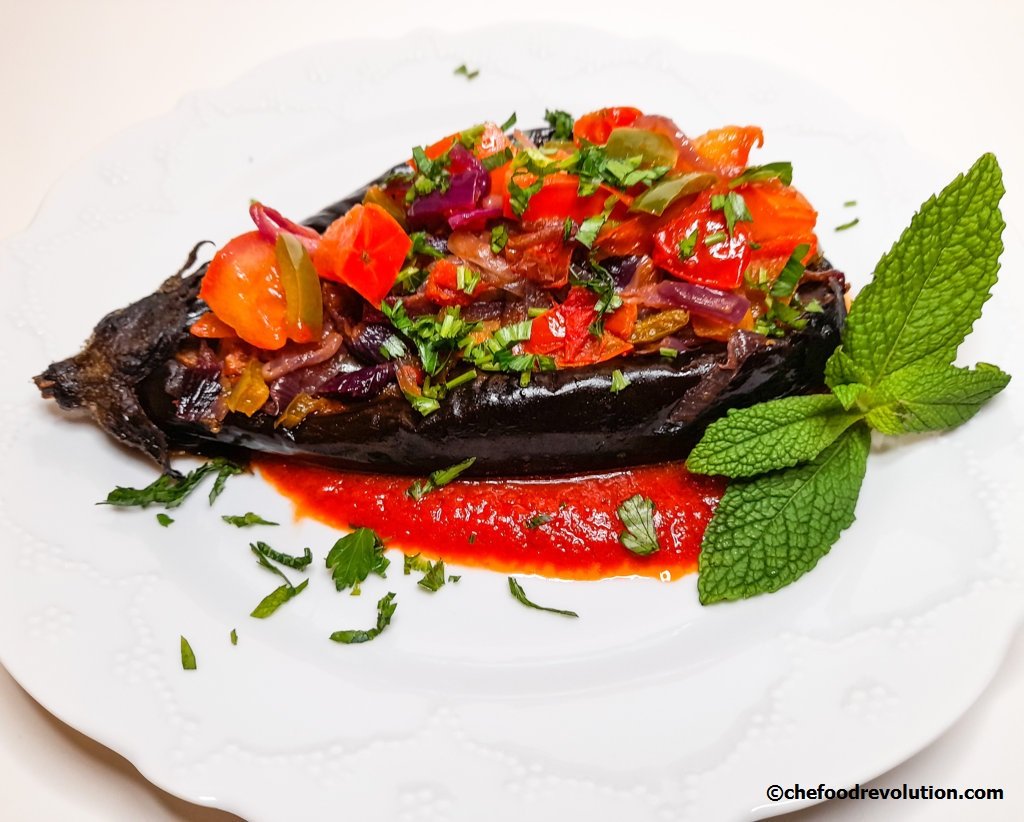 Since the eggplant season has just started, I want to write a tribute to this fruit of which we have all suffered the absence in the last 6 long months: Imam Bayildi or “Fainting Imam” or maybe better the vegan Turkish stuffed eggplant, is the traditionally vegan version of the famous and delicious Karniyarik (Split-belly!) with meat.

So for once I didn’t have to experiment to find the perfect formula to veg-etari-anize a traditional recipe. As with the famous dolma with or without meat (here is the recipe for this traditionally vegan culinary masterpiece), the two eggplant-based recipes are no exception. Karniyarik is prepared with meat and is eaten hot; while Imam Bayildi is made only with vegetables and is eaten cold, or at most at room temperature.

“But why did the Imam (colleague of the priest in the Islamic religion) faint?” Some say because of the unique goodness of the dish and some because of its exorbitant cost! (It goes without saying that olive oil has never been cheap, and once little used in the inland areas of the country, given the unsuitable climate). Nowadays, even if you were to use organic olive oil, the eventual fainting would only happen because of the yumminess: as long as you follow my advice, don’t fry the eggplants in abundant olive oil and only when it’s in season: I mean, how much do you think eggplants, tomatoes, onions, garlic and a few tablespoons of evo oil can cost! That’s why the recipe for Turkish stuffed eggplant, Imam bayildi, excellently meets all three criteria of the CHEtarian diet: economical, healthy and ethical.

To fry or not to fry, that is the question

The classic recipe for Turkish stuffed eggplant involves frying the eggplant, like another classic of Italian cuisine: the parmigiana. Cooking lovers will recognize that this purple fruit has a real passion for oil, and of which its spongy flesh never knows how to satiate… becoming divine to many, but indigestible to me. Aside from the extra calories, which are not really necessary, especially after spending entire months locked up at home, unnecessarily using oil in large quantities, fried to boot, is certainly not good for your liver, sustainability or your wallet (if you buy “good” oil, you know what I mean: when the olives come from intensive agriculture based on monoculture and excessive use of pesticides, their price is low). Of course people will tell me “it’s not like we eat fried food every day”! It is true, but every day we already exaggerate in something that requires a sacrifice to the body: just living in a big city or buying fruits and vegetables from the supermarket, would need to take a good dose of extra antioxidants, so do not aggravate the poor liver, especially when the difference between fried and baked food is really minimal. So go for the baking.

Besides containing a good quantity of mineral salts and vitamins, eggplants are also rich in dietary fibers, useful to regulate blood sugar and a good functioning of the bowel.

Did you know that potatoes can have a low glycemic index? Find out more here!

Just like potatoes and green tomatoes, eggplants are part of the family of Solanaceae, containing alkaloids toxic for the human organism; fortunately they are thermolabile, that is why members of this family should be consumed cooked. However even when cooked, their excessive consumption can cause the sensation of general malaise: headaches, diarrhea, drowsiness and so on. Moreover, for some subjects with chronic inflammations, these foods complicate the situation even more. Not to overdo in the intake of eggplants is a good practice also under another aspect: the high presence of nicotine! In the vegetable world eggplants, for their nicotine content, are second only to tobacco… of course with a considerable gap! While a cigarette normally contains 1 mg, an eggplant of 200 grams can have a maximum of 20 ug (micrograms), so do not worry, to take the same amount of nicotine present in a cigarette you would have to eat well over 10 kilos.

2 eggplants
2 medium onions (I used red ones, but all are fine)
2 medium tomatoes
2 green long pepper or 1/8 of a green bell pepper
2-3 cloves of garlic (cut them 10 min. before cooking: you can read about this important practice here)
a little evo oil to grease the eggplants
1,5 tablespoons of evo oil to cook the stuffing
½ tablespoon of evo oil to cook the eggplants with the stuffing
½ glass of water for cooking eggplant with filling
salt, pepper to taste
NB: the original recipe calls for 1 tablespoon of sugar: trust me, you don’t need it

For this recipe, if the eggplants are fresh, the result is even more spectacular, as refrigerated storage softens the flesh and dries out the skin.
Cut the eggplant into strips, (in Turkish we call this method a “pajama”), keeping the stalk.
In any respectable recipe, the preparation of eggplants begins by sprinkling them with salt, so as to release the bitter water. This technique, compulsory even 20 years ago, nowadays has lost its usefulness for many eggplants: they are not as bitter as their ancestors, thanks to the introduction of new varieties, selected properly because they contain less alkaloids (responsible for bitterness); moreover, the new harvesting practices consisting in harvesting the fruits before they are completely ripe, allows having a less pungent eggplant. Personally I do without salting (except in rare cases): I prefer practicality in cooking and I have a high tolerance for bitter tastes (I love chicory, radish and arugula). However if you have changed the seller or the type of eggplant, to avoid risking a bad result, put them in salt for 20 minutes, rinse them and with a cloth dry the excess water. This practice, however, is useful for all the varieties of eggplants and for all palates when they are fried: by salting them, we will prevent an excessive absorption of frying oil.
After piercing a few holes in the pulp with a fork, and oiling the surface of the eggplant, bake them in the oven at 200°C for 20-25 minutes (to save energy and CO2 emissions, use the oven also for baking other food at the same time).
In the meantime, cut the onions into very thin wedges and cook them in a pan with 1 tablespoon of evo oil over a gentle heat. After 5 minutes, add the thinly sliced green peppers; after another 3 minutes, add the garlic cloves (divided in two) and the tomatoes cut into small cubes. Season with salt and pepper and turn off the heat after 2 minutes.
In another saucepan, prepare a sauce with the freshly grated tomatoes or tomato puree, half a tablespoon of oil and garlic or shallots; cook for 5 minutes and then turn off the heat.
Once the eggplants are cooked, take them out of the oven, cut them from the long side, being very careful not to cut them in two; if necessary, with a fork crush the pulp, if it is well cooked it is not necessary; and fill the space with the filling.

Now continue cooking either in the oven or in a pot with a lid, adding half a cup of water (not inside the eggplant, but at the bottom of the pot/bowl) and half a tablespoon of oil.
After about 15 minutes, the Turkish stuffed eggplants are ready to be transferred to a serving dish.
When you are at the table, put some spoons of the tomato sauce in a plate, lay an Imam Bayildi on top and sprinkle it with freshly cut parsley: let the magic begin.

Enjoy your Turkish stuffed eggplants and good revolution to all

My name is Başak, food engineer with HACCP specialization. I research the balance of diets, according to their sustainability