Home » Food Awareness » What is Millet: Properties, benefits, why and how to cook it

What is Millet: Properties, benefits, why and how to cook it

What is Millet: Properties, benefits, why and how to cook it 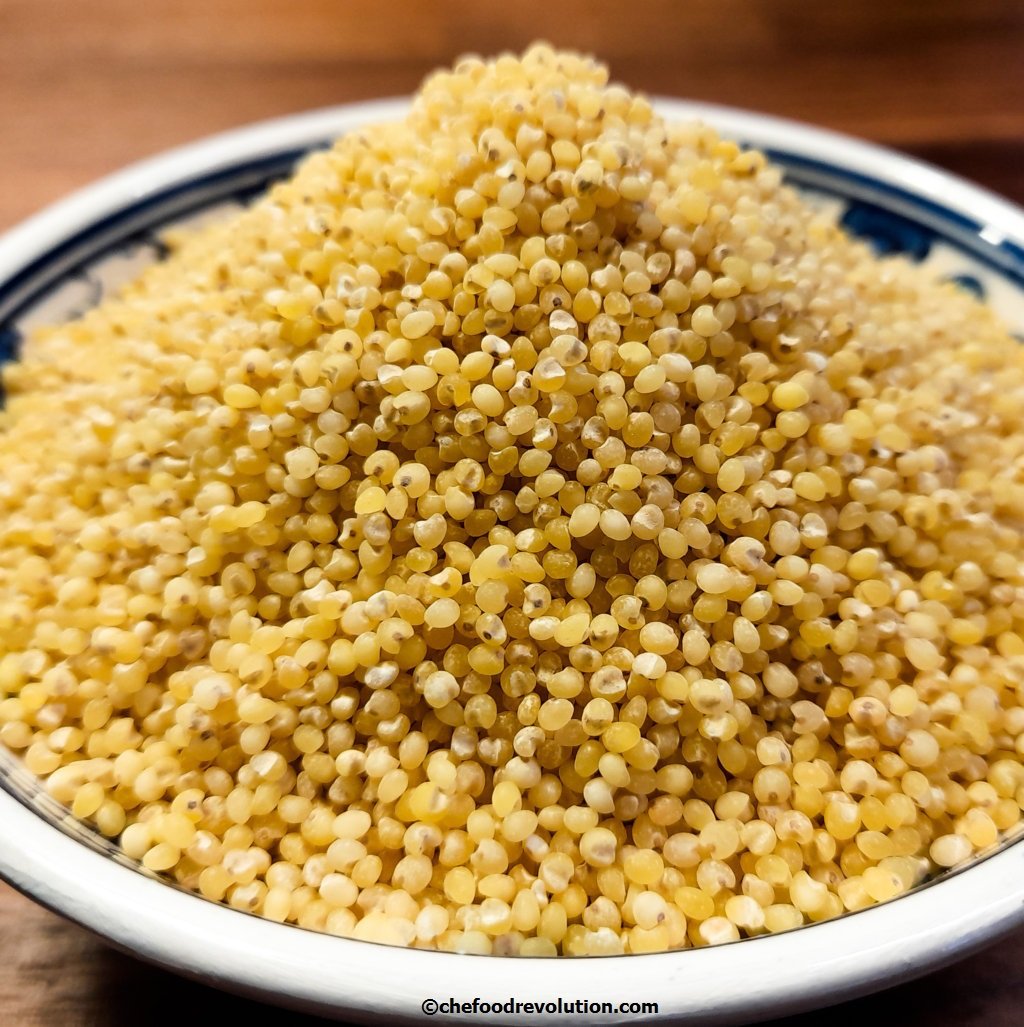 Drought is threatening the future of the world and some countries are already suffering from the impending catastrophe, as they come closer and closer to having to choose which sector to use the water for: agriculture or urban use.
In the most frightening (but perhaps most realistic) scenarios, we see that by 2100 global temperatures will have risen by 1 to 6 degrees in different parts of the world (1,2). This is a serious problem not only for polar bears, but for the whole of humanity: agriculture is very sensitive to variations in temperature!
Climate imbalances are becoming increasingly frequent: recently (16 February 2021) in the USA Houston was colder than Anchorage, Alaska, for the first time.
Unfortunately, human activities continue as usual over the past 40 years, polluting the atmosphere and depleting water reserves; perhaps adding before their names just the most ‘in vogue’ adjective of recent times: green-energy, green-agriculture, green-transport!
Exceptional cold and frost in places where they would not normally be reported; floods due to excessive precipitation of short duration; the various records of high temperature, with consequent drought, are the signs of the abyss we are facing; we are aware of all this but we do not try to reverse the route or reduce the speed… perhaps because we are already beyond the point of no return.
As conscious people, we do what we can: we abolish turbo-consumerism, we prefer public transport and/or bicycles, or we choose to reduce excessive food consumption, generated by the abundance provided by intensive agriculture and livestock farming.
But we can do more: we can choose foods that do not require much water during their cultivation.
After all, healthy eating also involves adapting to the planet’s current conditions.

After this brief but necessary explanation, I can begin to answer the question of what is millet.
I have decided to dedicate a special space to this cereal from the Gramineae family, explaining what it is, its nutritional properties, why we need to re-adopt it and how to cook it.

Millet is an important food because, just as it once did and still continues to do in the most climatically critical countries, it will perhaps be able to re-save humanity one day, even though we probably don’t deserve it!

When we use the term millet, we include a wide range of small grains, a true living example of biodiversity. So what is millet ‘should be thought of as plural’.

Worldwide, the most widely cultivated millet species is pearl millet – Pennisetum glaucum (almost half of all world production), followed by common millet – Panicum miliaceum and panic millet – Setaria italica, which together account for the other 30% of production; and the remaining 20% is composed in equal parts by African millet, Eleusina coracana and a wide range of minor species such as little millet Panicum sumatrense; Japanese millet – Echinochloa utilis, Kodo millet – Paspalum scrobiculatum, etc (3).
In Europe, mainly common millet and panic millet are grown. But you can also find the other species in specialized or ethnic shops or on online shops, in different forms for diverse uses: hulled or whole, in the form of flours, puffed or flakes.
Pearl millet is much more widely grown, as it is one of the cereals that is most resistant to drought; even with annual rainfall of less than 250 mm, it succeeds in being productive where it would take a miracle to grow its cousins (maize, rice, sorghum, bread and durum wheat) (4). It also has an astonishing capacity for photosynthesis, biomass production and other superpowers, so that it can withstand temperatures of up to 42 degrees Celsius (5).
As if that were not enough, it also has a very short growing cycle: it is automatically the most widely cultivated cereal in arid or semi-arid countries, such as sub-Saharan Africa and India; in other words, the staple food for at least 90 million people.
Personally, I appreciate it for its resilience, but I don’t deny that I have always felt sympathy for traditional ‘little match girl‘ style ingredients; consumed mainly by groups of people who can be defined as disadvantaged, millet was (and is) often called the ‘minor cereal’ or ‘poor man’s crop’.
But there are other issues to bring respect to this cereal snubbed by the wealthiest members of history: its nutritional properties.

What is millet from a nutritional point of view?

It is possible to give a different answer to the question of what is millet in terms of its nutritional properties. Millet can be considered as a functional and nutraceutical food because of its adequate levels of dietary fiber, proteins, minerals, vitamins and antioxidants essential for human health, and since millet has a lowering effect on fat absorption rate, cholesterol, heart disease risk and blood pressure lowering effects, it is also stated that it has preventive effects on cardiovascular diseases and cancer(6).

Millet’s recent fame in the wealthy western world is partly due to its gluten-free status. The ever-increasing number of people with celiac disease and those sensitive to the protein has been a major factor in turning the spotlight on this forgotten cereal, although it is almost as old as wheat.
It tastes much better than quinoa, but certainly not as good as wheat.
Not having gluten makes it a last resort choice for bread making; but it’s great for risottos, porridge, patties and desserts.
In fact, part of its notoriety derives from the fact that it is a cereal with important hypoglycemic effects; a mysterious property, since millet contains a high level of carbohydrates, while in terms of starch it is almost equal to rice; but thanks to its composition made up of lipids, proteins and phenolic compounds (particularly in wholemeal millet) it allows the subject to keep glycemia at bay, feeling full for a long time, even in the presence of glucose (7). This means that when used as a component of a dessert, millet can reduce blood glucose. This alone makes millet an excellent ally for diabetics and people with insulin resistance, or simply for dieters.

TABLE: Nutrient composition of some cereals (per 100 grams of ready-to-eat product at 12% moisture content)

Why should we eat millet?

The table shows how millet is rich in carbohydrates and fiber, but also in lipids: almost more than maize. It also has a decent level of protein, at least as good as wheat. Like all cereals, also millet does not have a complete essential amino acid profile, unlike quinoa (see more on quinoa here): lysine, threonine and tryptophan are missing from the list.

However, it has become a popular food even among vegans, thanks to its third characteristic: as well as being rich in minerals such as iron (to see how you can improve iron absorption read here), calcium, silicic acid and magnesium, it also contains optimum levels of methionine (pearl, African and Japanese millet also contain cysteine). These two sulfurous amino acids (methionine and cysteine) are rare in the plant world, i.e. they are ‘limiting’ for several legumes and cereals that make up the diets of vegetarians, vegans and CHEtarians. Therefore, if we combine it with other plant protein sources that are low in these essential amino acids but rich in the lacking elements in millet, we can achieve a complete protein profile.
For example, by combining pearl millet in a 3:1 ratio with chickpeas (i.e. for 50 g of chickpeas 150 g of pearl millet) we could easily achieve more than 100% of the daily protein requirement(9). This is why it would be advisable to add legumes (rich in tryptophan and threonine) and soya (rich in lysine) to cereal-based meals, as they lack lysine, threonine and tryptophan. In this respect, I will shortly be offering two recipes designed to create this complete combination, with simply divine results.
And last but not least, another reason for its rise on the culinary scene is the fact that it contains a high amount of silicic acid; an important mineral for nails, hair, bones, teeth, cartilage and skin: just look at the silky feathers of parrots and other birds, for which millet has always been considered an excellent food.
But caution should be exercised by those suffering from hypothyroidism, in which case it would be better to limit its use, due to the goitrogenic nature of millet, which can interfere with the absorption of iodine in the body.

How to cook millet

Millet is claimed not to need soaking, but I prefer to leave it in water for at least an hour. If you want to try wholemeal millet, I recommend soaking it for up to 4-6 hours to reduce the concentration of anti-nutrients.

After that it should be washed under running water using a colander until the drainage water becomes clear (to be more sustainable, wash it carefully, but instead of throwing it away, collect the drainage water to be used for your plants).
This step is important because like quinoa (it is striking how similar the two grains are) millet contains a high dose of saponins, which not only give it a bitter taste but also inhibit the absorption of its mineral salts.
The millet is now ready to be cooked; if it is to be eaten as a risotto, I recommend toasting it first with a little oil in a pan and then adding the water; if you want to make a cream or a cake (here you can find a delicious recipe), you can directly put it to cook in boiling water or milk: the quantity can be deduced by following the instructions on the package, as different varieties have different requirements.
In a pressure cooker it takes just 7-9 minutes after the hissing signal; in a conventional cooker it takes almost twice as long.
Also allow 3-5 minutes extra rest to complete the cooking process and help the grain to swell.

Happy revolution to all

Article Name
What is Millet: Properties, benefits, why and how to cook it
Description
Millet is a functional and nutraceutical food: discover its immense value, why and how we should consume it
Author
Başak Bartu
Publisher Name
CHE Food Revolution
Publisher Logo