Home » Food Awareness » Aquafaba: What is it and How to use the cooking water of chickpeas?

Aquafaba: What is it and How to use the cooking water of chickpeas?

Aquafaba: What is it and How to use the cooking water of chickpeas? 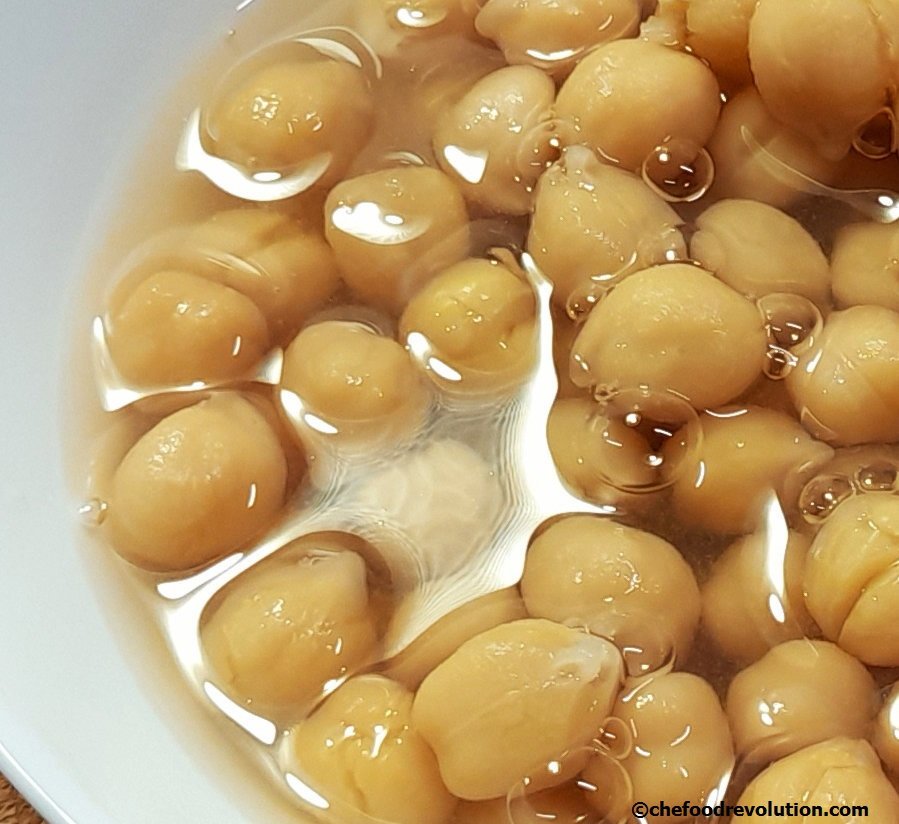 Technically speaking, aquafaba refers to the cooking water of all legumes, not just chickpeas. But this is how it is used and therefore I comply with this non-written rule too.
The history of aquafaba is quite original: its inventor, a French musician, looking for an alternative to egg white, asked himself “what could be as disgusting as this”; and it was there that he glimpsed similar disgust in the water of chickpeas.
It was the year 2014.
Whether by luck or intuition, he experienced the liquid and was enthusiastic about it.
But it was an American software engineer who put into practice its surprising characteristics and gave it the name widely known from the Latin: aquafaba, or “water of legumes”. And so in 2015, the world discovered the first eggless meringues!

How can Aquafaba replace the egg

So as a perfect outsider and with multitasking features, this insignificant liquid even for grandparents who witnessed the wartime, manages to assert itself in front of the most perfect of foods, the egg. The latter in fact (I talk about it in the article “How to Replace Eggs“), in terms of nutrients and culinary uses is to say the least unique; among the pillars of the food industry, thanks to its ” myriad of properties”, it allows every day to make millions of delicious foods, all over the world.
Aside from the shared viscidity, egg and aquafaba seem to have little in common.
The egg white is about 90% water; the remaining part is made up of proteins.
The surprise towards the imitation power of aquafaba, grows exponentially if we consider that its proteins instead consist of a measly 1%!

10 against 1 for me, it means “David against Goliath”.

In fact “Goliath” in the food industry does not only serve for its protein content, but also for other “super powers”: emulsifier, coagulant, foaming (but only when specific conditions are present in the environment, such as pH and temperature).
Analyzing ‘legume’s water’ under the magnifying glass, we find, with variable proportions, soluble carbohydrates (in particular polysaccharides), proteins and saponins. An evidently perfect mix that allows the poor aquafaba to emulate very well the mechanical resistance demonstrated by eggs; I am referring for example to what happens when we whip egg whites – just to let you understand what kind of warrior we are dealing with.

So the aquafaba is able to replace eggs in the preparation of some specific recipes (not for their nutritional or organoleptic properties), if used in the following doses:

Why do they say that Aquafaba is bad for you?

When they ask me the contraindications of aquafaba, I answer that everything depends on how the liquid in question was obtained. Because there are two ways to get it: by cooking yourself the dried chickpeas or by buying chickpeas in cans or glass jars.
You should know that there are not many studies on the subject, so we will have to use common sense to judge it.

Let’s play a game of true or false about the commonplaces about aquafaba.

FALSE – Today, 2020, we cannot say that only our ancestors possessed knowledge(!); I am very respectful of traditions, but it would be dishonest to think that modern uses and ingredients are all to be thrown away.
Moreover I would also have some doubts about its being “non traditional”: humus for example is a very traditional dish and (hear hear) is made by using also aquafaba! In fact its creaminess is partly due to the presence of chickpeas cooking water.
In the Italian cuisine the traditional “zuppa lombarda” foresees to use the cooking water of the beans.
The traditional “farinata” is made with the combination of chickpea flour and water, without any possibility of separating at a later time… the cooking water. I just want too add: the great traditional Persian scientist, Avicenna, sensed that the cooking water of chickpeas could have some healing properties; so much so that he reported some of its possible uses for the treatment of several diseases in his colossal book “The Canon of Medicine”.
So certainly our ancestors did not eat meringues produced with aquafaba, but they did use it for sure.

TRUE – The plastic with which the metal cans have been lined contains BPA: a substance that may cause cardiovascular disease, diabetes, hormonal dysfunction, obesity, sexual dysfunction and may act as a neurotoxic in case of prolonged use. Therefore, BPA makes not only aquafaba dangerous, but everything that it comes into contact with. While in the US only a 10% of cans still contain BPA, in EU, most countries have banned there are restrictions prohibiting its use for the food of infants and young children; but for the rest of the population, all that has been done was to reduce the permitted amount. For this and other reasons I would advise you not to buy food in cans, in general. At most, I would suggest glass jars: these solve the problems related to BPA, but not the industrial procedures for cooking; which may signifcate no particular care to eliminate or reduce the anti-nutrients that chickpeas, like all legumes, naturally contain. For the food industry, that liquid is only conceived to be thrown away, not to make mayonnaise with it.

TRUE – In fact we owe the characteristic foaming feature of aquafaba to its saponins. But we are not sure to what extent these can be a problem for healthy adults. Saponins are present in most plants such as legumes, cereals, pseudo cereals such as quinoa, vegetables, alfalfa seeds, but also ginseng and mate leaves etc..
These act as a defensive shield in plants because they are toxic to insects.
There are various saponin species and all have different properties.
In humans some saponins if administered in high dosages (intravenously) have the ability to form red blood cell hemolysis(1). Adequate consumption, in healthy subjects with healthy intestines, normally does not cause dangerous side effects; but if it is exceeded, by consuming it at every meal and every day, can cause digestive disorders such as stomachache, swelling, etc. (It must be said that consuming eggs daily, would be equally harmful)

This is what we knew about the subject until a few years ago.

Recent studies indicate that saponins have also anti-cancer properties, they can inhibit the growth of cancer cells, help to prevent obesity and they are considered among the molecules with great nutraceutical capacity with anti-inflammatory, hepatoprotective, cholesterol-lowering effects, cardiovascular benefits, and prebiotic behaviors on the microbiota(2,3,4,5,6).

However, if you want to be cautious such as I am, apply my tactics:

– Using dry chickpeas is a good rule to get an excellent aquafaba, as well as excellent legumes to bring to the table. Observe long soaking periods, changing the water several times and cook the legumes very thoroughly.
Dry chickpeas, besides being low cost and eco-friendly, thanks to the above mentioned process, guarantee an aquafaba with low concentration of everything considered dangerous for human health: saponins, phytates and oligosaccharides; in other words, anti-nutrients.

– Do not consume every day sweets and sauces made with aquafaba.

– Continue to be moderate in your food consumption: this is valid for both eggs and aquafaba (see what is CHEtarian diet).

How to use it?

After having understood what it is, let’s see how to use it in the kitchen.
The first time I let my husband taste the fruits of my experiments, he didn’t believe his eyes and palate: “how the hell could the cooking water of chickpeas generate excellent meringues, creams, mousses, humus, batters for frying, crepes or even mayonnaise!”
If this is something you cannot believe, please read my recipes for humus, farinata and vegan mayonnaise.
The online recipes usually include the use of industrially prepared chickpeas, but as already mentioned, I strongly advise against this.
So after opting for dry chickpeas and execute long soaking phase, we can keep on cutting down the anti nutrients: by cooking the chickpeas for at least 45 minutes (or less with the pressure cooker).
But be careful, as the aquafaba obtained without any further care, could compromise its ability to create a solid and stable foam.

Don’t worry, I did my research!

In one study(7) the chickpeas were cooked in the following proportions of water: 1:2, 1:4 and 2:3 and for 15, 30, 45 and 60 minutes. Then they measured the various substances and properties: tannins, phytic acid, proteins, emulsifying and foaming capacity, stability of the foam structure, binding capacity between water and oil.

After several attempts the best proportion resulted was 1.5 parts of chickpeas, cooked in 3.5 parts of water, so keep these numbers in mind the next time you cook the chickpeas.

Enjoy your aquafaba and good revolutions to all

Article Name
Aquafaba: What is it and How to use the cooking water of chickpeas?
Description
Aquafaba, discovered only recently, is a valid substitute for eggs to make delicious and surprising recipes
Author
Başak Bartu
Publisher Name
CHE Food Revolution
Publisher Logo