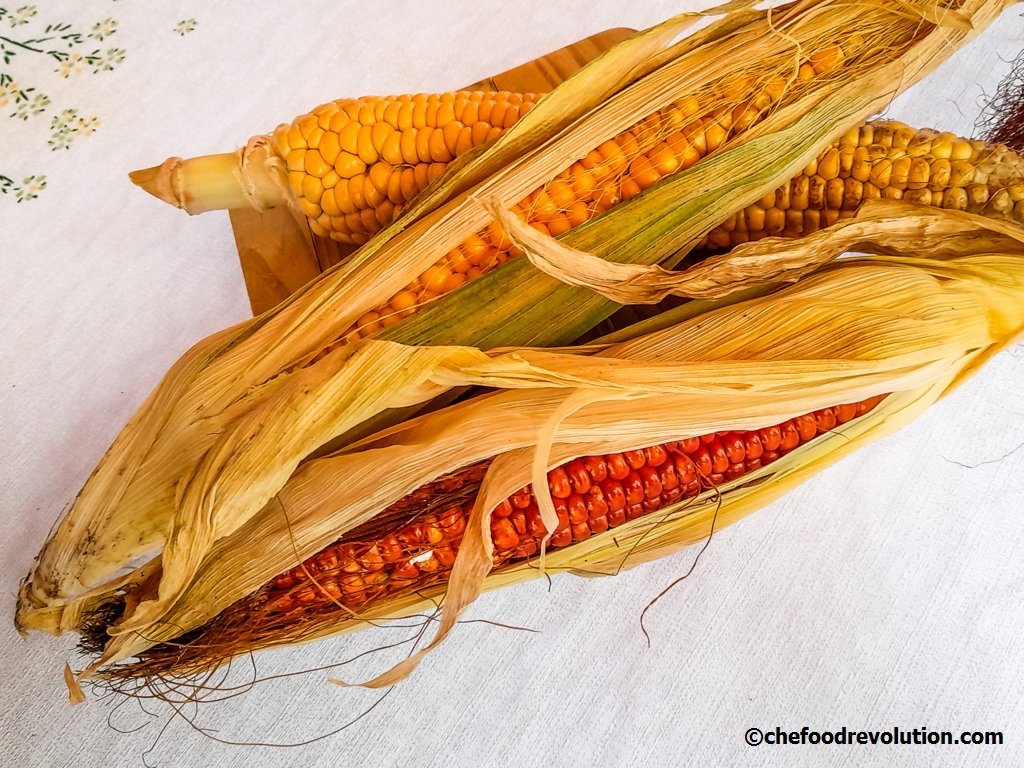 Don’t you think that corn is good for you? And what about environment? Does corn make you fat? Is corn a GMO?
Unfortunately, it seems that corn has made a pact with the devil: consumerism, junk food sector in the lead – and so much more – owe their popularity to these golden kernels.
But I want to show you that corn is good for you, by examining its characteristics from several aspects.

The production and genetic modification of corn

Without a doubt, corn is one of the most widely grown foods in the world: its production is increasing year by year, making it practically the king of grains (1,125.88 million tons last year; this year it is estimated to become 1,210.45 million tons). However, the surge does not stem from a food need relating directly to humans: about 73 percent of the corn grown is for livestock as feed, and for the production of ethanol to be used instead of gasoline.

Yet, if we were using it exquisitely for the sustenance of humans, now we would not be talking about its unsustainability and enormous environmental impact: the blame lies with the aforementioned livestock farms and the bio-fuel industry. And there is another accomplice.

Corn is good for business: the food industry is based on the golden kernel

It’s been a long time since roasted corn on the cob, along with watermelon, constituted the only summer food icons.
In fact, today’s children of Western countries maybe do not snack on half a cob, but they still consume significant amounts of corn (the unhealthy kind) as a by-product. Don’t you believe me?
More than 3500 food and technology products are made from corn[1].
In other words, more than 90 percent of what we normally consume in industrialized countries contains corn. Of course, if you expect to “see the kernels,” you are way off the mark: corn is a skillful natural transformer, and the food industry has been able to exploit this characteristic in every way possible and imaginable (honestly, far beyond imagination). As a result, it has now become much more commonplace to encounter corn in the form of starch and modified starch, corn syrup, high-fructose corn syrup, breakfast cereals, oil and again in several key ingredients for the various food-related industrial processes such as dextrose, poly-dextrose, dextrins and maltodextrins, maltitol, sodium glutamate, sodium erythorbate, modified starch caramel, ascorbic acid, citric acid, baking powder, xlitol, xanthan gum and much more (without mentioning uses in pharmaceuticals, cosmetics, plastics, energy, etc.,); after what has been said so far, I imagine the bowl full of popcorn will sound anachronistic to you.
So we can say that the food industry owes its very existence to corn.
And we can also say, however, that while it is good for business, when highly processed through complicated industrial processes, corn stops being good for health.

Corn is good for you, as it is rich in nutrients: but watch your portions

If you avoided corn because it is high in sugars and starches, your fear was not entirely unfounded: a small 70-gram raw cob contains about 14 grams of carbohydrates, including 4.5 grams sugars. Therefore, although corn is also classified among vegetables, it would be better to consider it rather a cereal and consequently limit its portions and seasonings so that blood sugar and your weight are under control.
To reiterate, just moderate its consumption, do not eliminate it totally from your diet: indeed, corn is good for you because it is a valuable aid from a nutritional standpoint.
Corn is not very rich in protein, unlike legumes or other grains (here it behaves like a vegetable), and lacks some essential amino acids (lysine and tryptophan); nevertheless, not including it in the diet would mean giving up, along with carbohydrates, important functional molecules: including calcium, iron, phosphorus, magnesium, manganese, potassium, copper, zinc[1]; vitamins A, B, C, E and K; antioxidants, especially carotenoids (lutein, zeaxanthin, β-cryptoxanthin, and β-carotene) and flavonoids (I would like to point out that corn has the highest total antioxidant activity-181.4 ± 0.86 μmol of vitamin C equiv/g grain-among all common grains, such as rice, wheat, and oats)[2]; phenolic acids (ferulic or coumaric acid); and dietary fiber[3].
Precisely because of the fiber it contains, it manages to be a prebiotic food[4], thus vital for the gut microbiome and for the general well-being of the individual (read more here). Due to the presence of said phytochemicals, whole corn is considered a useful food in protecting cardiovascular and digestive health; as well as reducing the incidence of type II diabetes and even obesity[5].
To be honest, limiting its consumption becomes all in all easy: buying organic costs money, reducing the possibility of overeating and that is my first advice.
In fact, if possible, choose organic corn or buy it directly from the farmer’s market: corn is considered among the vegetables that require the least pesticides, but it may come from GMO seeds (if this is a matter of concern for you choose organic); or inform yourself on your country’s regulations: for example in Italy the cultivation of GMOs is (still) forbidden, but not their importation.

One important thing is clear from reading the previous paragraph: what should be demonized is the industrial by-products of corn, not its genuine form, (or at best that prepared at home -although technically cooking itself is a process that moves corn away from its natural state).
However, more natural does not always mean healthier.
Corn, like other grains, contains molecules called anti-nutrients: they serve the plant to protect itself from the ‘ravenousness’ of animals.
Most important anti-nutrients in corn are phytates; and they cause reduced absorption of nutrients such as protein and/or essential minerals (in corn varieties other than those found in Europe, or those used as feed also cyanogenetic glycosides, phytates, saponins, trypsin inhibitors, oxalates and tannins can be found)[6,7].
Eliminating or reducing their amount is easy, just let the corn soak (when possible) or cook it properly, since these molecules are thermolabile.
In conclusion, corn should be natural yes, but not raw!
After these necessary technical and scientific clarifications, let’s look at the best ways to eat so that corn is good for you without any doubt.

Which corn is bad for health?

Corn starch is an industrial, refined product: it has been stripped of the germ, endosperm and bran, so it lacks the nutrient treasure trove of the whole kernels.

Corn oil is obtained by invasive processes; it is to be considered a highly industrial product (about 99% of commercially available corn oils are to be defined as such), so it is not included in a healthy and clean diet.

In addition to being a highly industrial product, it is believed to be responsible for growing obesity, metabolic diseases and childhood diabetes: to be avoided categorically.

Another highly industrial food that can significantly raise blood sugar levels.
The ideal breakfast includes healthier alternatives such as oatmeal; or choose an original idea from those suggested here.

Most food products defined as ‘junk food’ contain at least one ingredient that is a by-product of corn. In this case we are far from healthy corn.

Which corn is good for you?

The best way to preserve the composition of functional bio-molecules, while denaturing molecules defined as anti-nutrients is to steam it or even microwave it; 10-15 minutes of steaming is ideal for most cobs (if they are very fresh 7 minutes, or if you like them softer 15-20 min).
The roasted/grilled cob version, despite involving fewer nutrients because of the high temperatures, remains for me the tastiest way to enjoy corn in a healthy way (10-15 minutes on the grill function, being very careful to turn it frequently).
Boiled corn is perhaps the most common way to cook it, although several B vitamins dissolve in the cooking water (about 7-10 minutes in a pressure cooker or twice that with a regular pot).
Adding little salt and little oil/butter will help make it healthy all the way through.

Perhaps the most beloved of whole foods; popcorn, when made at home, becomes a healthy snack; with nothing to envy in terms of taste to those sold inside plastic bags and high in fat and salt (in order not to repeat the same mistake, use little salt and little oil: it will be just as good). This corn is good for you and kid-approved.

That is, when corn kernels are ground, thus obtaining a whole-wheat flour: cooked together water creates a fundamental and healthy dish for the nutrition of several civilizations.
Of course, this preparation should be understood as a carb source and not as a vegetable; limiting fatty seasonings is not an option if we want to stay in the healthy food range.

Bread, tacos, cakes, soups, and more. This can be a good substitute for classic wheat flour, especially for those with celiac disease, since it is gluten-free (but some very sensitive celiacs may develop intolerance anyway).

Corn is an ancient food that still feeds billions of people around the world; eliminating it would be foolish as well as detrimental to humor. Just adopt conscious choices and the ever-prescribed moderation.
So now that you know which corn is good for you and which is not, try to introduce the healthy options into your diet more frequently, while limiting portions and seasonings: snacks, salads, vegetable dishes, will never be the same again, I promise!

Good revolution to you all

Article Name
Corn is good for you only if eaten as naturally as possible
Description
Industry has appropriated corn by turning it into a big problem: let's see how to continue to benefit from its nutrients
Author
Başak Bartu
Publisher Name
CHE Food Revolution
Publisher Logo