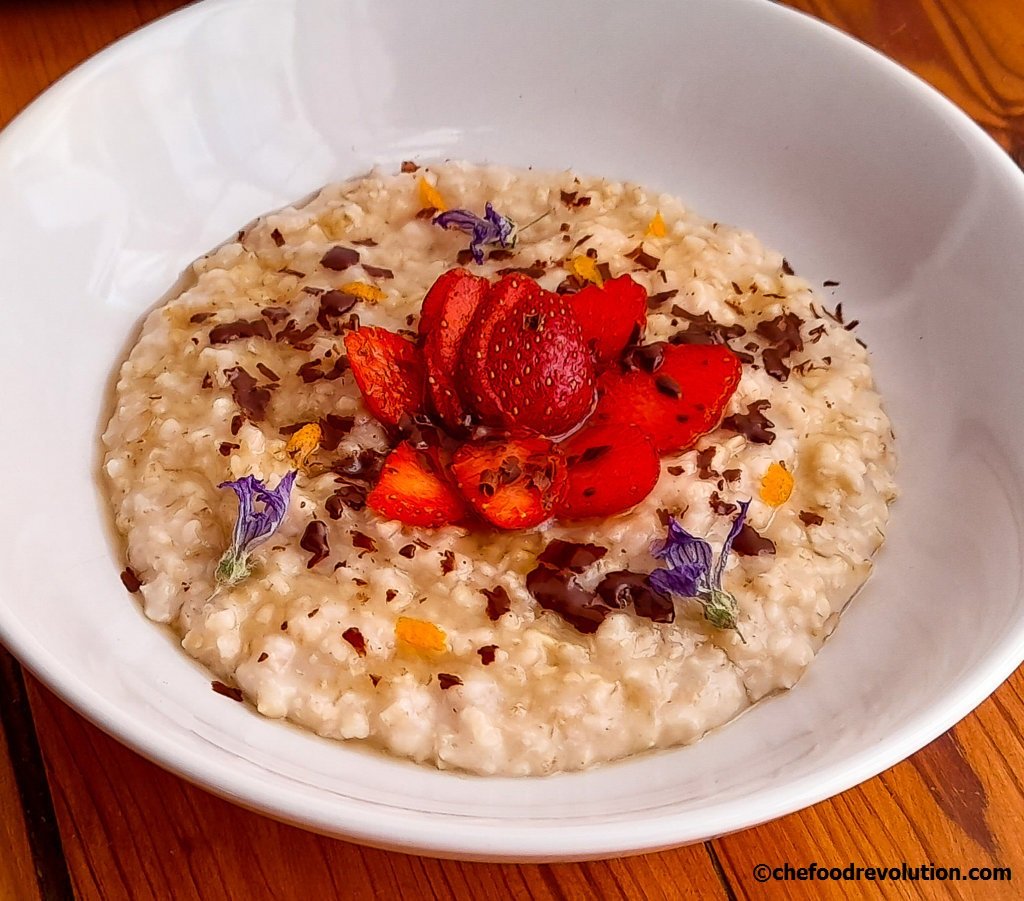 As the most important meal of the day is breakfast, I have long wanted to share my perfect porridge recipe.
I learned to appreciate it in my adult life, thanks to the books of a great navigator, “Bernard Moitessier”: during his solo voyages he used to prepare it to ensure nourishment and comfort.
Oats have always been considered an important cereal in human nutrition, even though they have been used more as animal feed (horses above all) [1].
The first to cultivate it in history were probably the Chinese (A.. C 7000); the ancient Greeks, on the other hand, are credited with having thought of oats as a food in the form of soup; yet the name “porridge” indisputably belongs to the Scots (according to the MacMillan Dictionary “the name porridge is said to derive from ‘pottage’, an archaic word meaning thick soup or stew“): but to be fair, they discovered oats much later than the aforementioned peoples and thanks to the ancient Romans. Well you know, every road leads back to Rome, although for the ‘too fine’ palates of my husband’s ancestors, porridge was considered a food for barbarians.
Oats proved to be the right cereal for the Scottish lands, unable to meet the demands of wheat, due to high humidity and low temperatures; as modern Romans say now, ‘necessity made a virtue’, so that porridge was elected by the ‘people in kilts’ as the national breakfast dish. And lucky for them it was, given the popularity the precious food enjoys today.

Why are oats becoming so popular?

There are a number of reasons why oats are the health food of choice, so much so that it has been called a superfood; here are just a few:

– it’s gluten-free: Between coeliacs and people who simply prefer to give up gluten, a large group of consumers are choosing oats as their primary dietary grain.
But beware: Coeliacs should only consume oats labeled ‘gluten-free’ to avoid a product at risk of cross-contamination;

– there are no GMO oats: because it has been considered a minor cereal compared to maize and soya, there is no intensive approach by agribusiness; thanks to this, there is not enough funding to date to support research and development of commercial GMO seeds.
Moreover, its natural genetic composition, four times larger than the human genome, makes any research very difficult and expensive.
However, it is good to know that the only bio-tech investigation into oat genes is being carried out to learn its resilience, so that it can be replicated in other cereals [2];

– it’s cultivation is more sustainable: it does not require very fertile soil making excessive use of fertilizers unnecessary [3];

– it is not bombarded by pesticides: oats are able to compete with weeds on their own and can also defend themselves against insects, thus requiring fewer pesticides and herbicides. In any case, if you can, choose organic: in conventional agriculture everything is added with the wide range of agro-chemicals;

– has an excellent nutrient profile: it is among the most nutritious of the popular cereals, but it is not only rich in complex carbohydrates.
Its protein content, ranging from 12-15%, may not be able to compete with soya, but it is more bio-available than maize and wheat and lysine, which is one of the limiting amino acids, is the highest among all cereals.
It is rich in fiber [4] (beta-glucans), vitamins (B5, B1, folic acid, E) and minerals (calcium, phosphorus, magnesium, manganese, iron, zinc and copper), without being heavy at all, making it ideal for those who need to lose excess weight;

– it is a natural anti-cholesterol [5], anti-inflammatory and anti-atherogenic, thanks to the presence of polyphenolic avenanthramides with antioxidant properties: therefore able to offer considerable aid to cardiovascular and chronic sufferers [6];

– it has a low glycemic index, guaranteeing satiety for several hours even for those suffering from diabetes.

Ingredients for the perfect porridge recipe

80 g large, wholegrain old fashioned rolled or steel cut oats
350 ml water (but you can make a mixture of water and milk) + 100 ml milk or plant based milk to add when cooked
2 teaspoons of honey, or sugar, or maple syrup, or pekmez (grape molasses); in case you use rice or oat drink, you don’t need to add extra sugar: they don’t contain added sugar of course, but they are already very sweet (at least for me and my husband)
1 pinch of salt

If you don’t have a scale, you can use 1 cup of oatmeal and 2 cups of water+milk.

There is nothing easier than making porridge.
Put a saucepan over medium heat, pour in the large oat flakes and immediately cover with water.
After boiling, reduce the heat, add the salt and cook the porridge for about 10-15 minutes (steel cut oatmeal require more time), stirring frequently.
Then serve hot or cold, combining it with the ingredients described under ‘Smart Combos’.

For the original and perfect porridge recipe here is the advice of my dear friend “Albert”:

1) Prepare it at least once only with water, you will realize that cooking it with milk is not necessary.
In fact, ever since I tasted his porridge in a bay on the magnificent Greek island of Symi, I never cook it with milk or a plant based milk. To add a touch of flavor, simply stir in the desired amount of milk just before serving; this way you will also avoid burning your mouth.
This trick is not only ideal for reducing costs, but also to avoid going crazy with cleaning the bottom of the pan: it is very easy to forget to stir it, ending up with porridge that inevitably sticks to the pan.

2) Add a pinch of salt.
Although Albert knew he had to do this he didn’t know why… which I explained to him. Pairing savory with sweet is a trick used by multinational food corporations for better palatability, but there is more: oat proteins are soluble in a salt solution; adding salt to the cooking water increases their bioavailability, making porridge an ideal meal for athletes, children, the elderly and the sick

Fortunately, in the world of CHE, practical advice is never enough!
If you can’t dedicate your very limited time and attention in the morning to check and stir the pot, don’t worry, you’re not destined to eat bagged croissants for the rest of your life: you have 2 viable options for making the practical, perfect porridge recipe:

1- Make an overnight porridge, without cooking – mix oats and water in the recommended amount in a container before going to sleep (keep in mind that 3-4 hours is enough for rolled oats, in the case of fine flakes even 30 minutes) and place it in the fridge; in the morning just take it out of the fridge, warm it up if it’s winter and serve with some extras.

2- Cook it on Sunday (or when you have more time) in large quantities to cover the 5 days of the week; form the portions and keep them in the fridge until you can use them again.

Oats are rich in antioxidants, vitamins, complex carbohydrates and protein (about 5 grams in 150 grams of porridge made with just water and oats). However, to make it to lunchtime without going hungry, we could enrich the porridge with more protein (plant based or not), good fats and why not fresh or dried fruit to improve the appearance and taste.
Below are some examples of combinations for 2 people:

– 1 tablespoon chia seeds (for more omega-3) and seasonal or dried fruit, as long as it’s local and unsweetened,

– 1 banana (preferably domestic), half sliced and half mashed with a fork, and a few slivers of fair trade dark chocolate,

– 2 tablespoons of Greek yoghurt and 2 teaspoons of honey,

– or for the savory lovers, egg or cheese with sun-dried or fresh tomatoes.

However you want to combine it, know that you are doing something good for your body and the planet.
Enjoy your breakfast and have a good revolution