Vegan and Glutenfree Chia Seed Pudding, with orange and cinnamon: an easy recipe with an enchanting taste 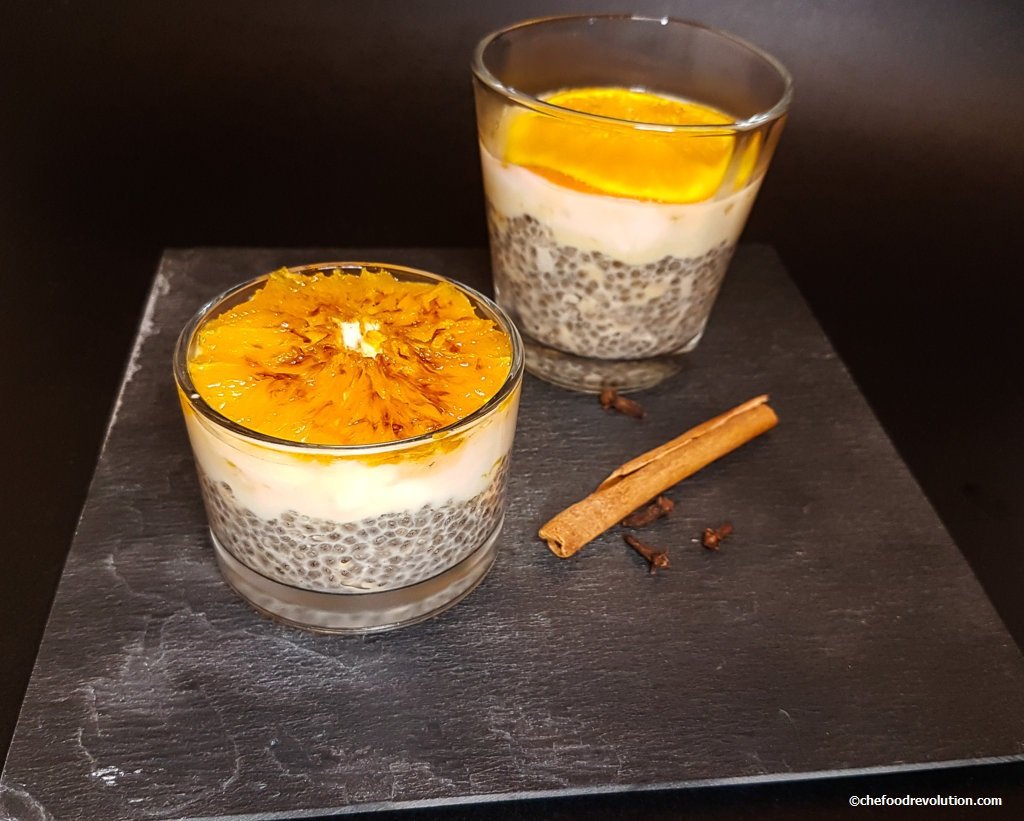 Before I give you the recipe for vegan and gluten-free chia seed pudding, I would like to tell you about the benefits of these seeds classified as “super food” for the human body.
The plant, although native to Latin American countries, with its characteristics of needing little care and little water (it even loves deserts and altitudes) is also successfully cultivated in Asia, Australia and even in Europe. Moreover, it seems that there is (still) no risk of encountering GMOs and nothing that contradicts its sustainability. It contains 12 grams of carbohydrates per 100, and 11 of these are just dietary fiber, which sounds very good to my ears: but precisely because of the high fiber content, you have to drink a lot of water when you consume it; these seeds absorb water, about 12 times their volume.
They contain very high levels of manganese, phosphorus, copper, selenium, calcium, potassium, magnesium, zinc and iron (although zinc and iron are not absorbed effectively due to the presence of phytic acid, as well as the considerable content of calcium); consider that in 25 grams (or two tablespoons), chia seeds contain 157 mg of calcium, practically more than what is present in 100 ml of milk!
They are also very rich in protein, about 19%, which means much more than staple cereals such as wheat (14%), corn (14%), rice (8.5%), oats (15.3%) and barley (9.2%)(1); besides, we are talking about a source of high quality protein, since it contains 18 of the 22 existing amino acids and all of the 9 essential amino acids.
However, as every rose has its thorn, unfortunately, that rich protein content is not properly digestible: roasted seeds have a very low digestibility of about only 10%. In the same way, toasted flour and unprocessed seeds have also unclassifiable levels, respectively 29.01% and 34.18%.
Only unprocessed flour is considered ‘acceptable’ with a digestibility rate of about 80%, which is defined by FAO/WHO standards as a low protein digestibility.
Another contradiction comes from the fat content. The precious omega-3 fatty acids, although present in chia seeds in considerable quantities, are found mostly in the form of alpha-linolenic acid (ALA), and only a small part in EPA, which means that our body must convert them into the “currencies” accepted for metabolic processes, such as EPA and DHA, the latter being the most important of the group; unfortunately, the dedicated conversion process is far from being efficient(2).
So here’s my conclusion: Chia seeds are like a treasure chest full of precious jewels, but we don’t have the key to get them at the moment. They undoubtedly have enormous potential -not for nothing, chia seeds had been the staple food of the Aztec warriors- and I am sure that with technological development, we will soon find a way to make that key.
So till that day let’s use them for their surprising properties and versatility in the kitchen: among them the ability to form a gelatinous structure if combined with water, a valid alternative to eggs in many recipes. To have the same quantity of an egg it is recommended to add a tablespoon of ground chia seeds to three tablespoons of water and wait about 2 hours.
As always my advice is moderation, we should not consume abundant quantities (max 25 g per day) because they are very close to a superfood! Let’s not forget that chia seeds are making part of our lives from a short period and their original consumers certainly were not fans of food madness like many in western part of the world.

1 cup of unsweetened plant based milk: coconut, almond, oat etc (non-vegans can use milk)
1/4 cup of chia seeds
1 tsp of ground cinnamon
1 tsp of molasses of grape or maple syrup, otherwise 2 tbsp of cane sugar
zest of an orange, organic
a pinch of salt

4 tbsp of unsweetened plant based yoghurt (non vegans can use normal yogurt)
1 orange cut into dices (put aside away two slices for dressing as in the photo)
1 tbsp of cane sugar
1 stick of cinnamon
1 tbsp of almonds, toasted smoothly and then ground
Two drops of natural orange blossom extract (optional)

Mix well all the ingredients of the vegan chia seed pudding in a bowl; cover it and put it in the fridge for at least 4 hours, or overnight in order to thicken it. If you wish, you can already prepare the individual glasses, or you can do it without any problem later, without any risk for disturbing the structure of the pudding.
Afterward cut an orange into cubes such a way as to leave a minimum quantity of pith; sprinkle the cubes with sugar and leave to rest for a few hours, to make them release their juice. Then, in a non-stick pan, cook the orange dices together with the cinnamon stick; when the cubes have softened, turn off the fire and leave them to cool: if you want you could create a homogeneous puree with a hand blender (removing the cinnamon stick), a choice that depends exclusively on you.
Put 5-6 almonds in a non-stick pan, toast them for 40-60 seconds stirring continuously, then grind them.
Add the orange puree (now cold) to the plant based yoghurt and ground almonds; stir well and place in the fridge for an hour or two.
Caramelize the two orange slices in a pan for dressing, by sprinkling the sugar.
Take the chia seeds pudding out of the fridge, put it in small glasses and cover it with the mixture of yoghurt with orange sauce; and in the end dress it with the caramelized slices.
Enjoy your dessert and good revolution to all

This recipe can be made with almost all seasonal fruits: in spring use strawberries, in summer peaches, in autumn plum or persimmons and in winter apples as well as oranges. The presence of organic acids and Vit C contained in the fruit will help to reduce the content of phytates present in chia seeds(3), thus increasing the absorption of iron. If you like it you can also add a few flakes of dark chocolate: it is really a light dessert, a touch of deliciousness will not harm the final result. Moreover, if you want, you could prepare more of it, so that you can eat it in the following days: the pudding, in case you used very fresh milk (the package must be opened on the day of pudding preparation), could be kept in the fridge in excellent condition for 4-5 days