Home » Food Awareness » Bread waste: let’s see how to reduce it with some simple tricks

Bread waste: let’s see how to reduce it with some simple tricks

Bread waste: let’s see how to reduce it with some simple tricks 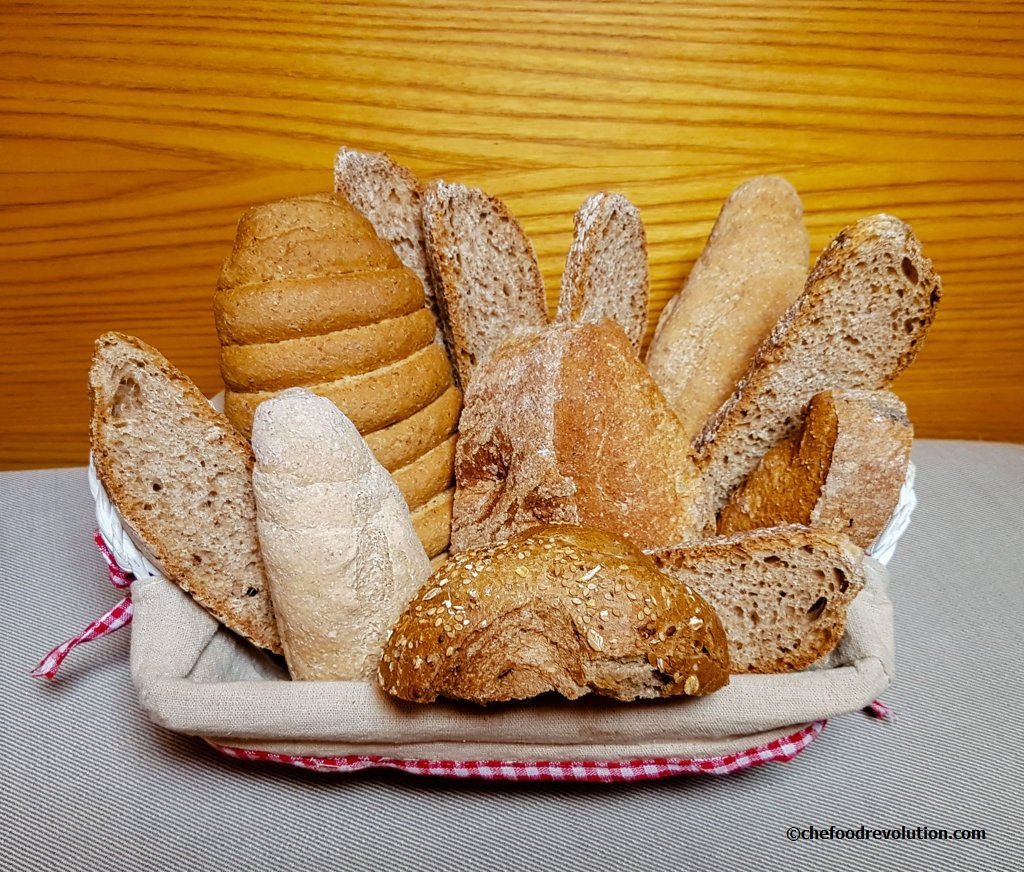 Yes, sometimes happiness is hidden in the crust of a loaf. We could already feel it inside the bowels, but knowing that bread (esp. wholemeal bread) stimulates the secretion of the serotonin hormone(*) is a scientific truth that gives more value to this awareness.

Definable as one of the oldest and most traditional foods, bread is loved by almost all peoples on earth. It costs very little; it is satiating for a long time; comforting; some even very healthy, ethical and fair; in spite of what is normally believed, it does not make you fat (if anything, the responsible is to be found in the other ingredients which complete the meal).

So it is a magnificent resource if consumed in the right quantities; unfortunately we humans have the bad habit of appreciating half measures, we like to “overdo in every our activity” and our “irrepressible” nature creates a real – even if it seems invisible to many – economic, environmental but above all ethical disaster: I am referring to the immense bread waste that we cause in every so-called “civilized” country.

How much does it cost us our desire to have always fresh bread?

I do not deny it, bread when fresh has no rivals: the scent, the crunchiness of the crust and the softness of the crumb all together are there to define the recipe of perfection. And we consumers in the civilized part of the world, like spoiled children, want to have fresh bread, in every thinkable shape, at every meal of the day; and bakers, as well as supermarkets, satisfy our whims like parents without authority. For this reason, bread is baked 2 or even 3 times a day for those who want a rectangular or a circular bread, for those who want it in single portions and those who want it in family size, for those who want to make a bruschetta or a sandwich, maybe with black cumin or sesame seeds or without anything on top, with durum wheat, or soft wheat, or kamut wheat, for those who want it more proteic or for the ones who need a bread gluten-free, with super refined flours or mixed whole grain flour, with brewer’s yeast or sourdough, with salt or without, with milk or with oil or even lard, or why not with olives, nuts, raisins or onions…

I can continue for another page but in short, we should understand that too much choice inevitably creates too much waste.

It is assumed that supermarkets are responsible for 50% of bread waste, but to attribute half of our fault to them would not be honest, because if there is no honesty, no valid solution can exist. Our insatiable attitude in the case of bread does not act alone, but with a perfect “outsider”: bureaucracy. It seems absurd, doesn’t it?
If in Italy but also in Germany about 1,3 milion tonnes of bread are thrown away every day, this happens in part because bureaucracy prevents its recycling into derived products, such as breadcrumbs; it is not even permissible to donate leftover bread (not moldy, of course, but simply no longer crunchy) to the various charity organizations or soup kitchens, because it is not provided for by the strict hygiene criteria that regulate the sector.
This is why the ‘monster’ of bread waste is unstoppable and grows day by day, and those who have to find a decisive solution do nothing, on the contrary they hinder every possible way of its possible recycling(**).
But there is more; bakers (or rather better industrial bakeries) in order to be able to stipulate more contracts with buyers/sellers in order to be able to be more competitive, offer the guarantee of return for the unsold bread. This means that a supplier could satisfy several supermarkets by providing them with warm and crispy bread during the day, and in the evening collect the (many) unsold product by refunding the buyer the price paid for the purchase. So the supermarket that acts as an intermediary between the baker and the customer, wins in any case: it increases sales by stimulating the desire to buy more goods to its customers, thanks to a counter full of fresh bread in various forms, without any economic risk.
The “dealer” you know, that is the large-scale retail trade, always wins; who loses is always the artisan and/or the small entrepreneur together with the planet and its resources, already exhausted.
Because as I mentioned before, any reuse of unsold bread for commercial purposes and even its donation for humanitarian purposes, is prevented by the regulations in vigor: the returned bread must be disposed of as food waste, which is paid first of all by the baker’s pocket but also by the whole community, because the inevitable consequences that arise from an environmental point of view, concern all of us.

(**) There are actually forms of recycling that have nothing to do with a healthy ethical and sustainable attitude. I refer to its possible recycling as animal feed or to the research of futuristic (and very expensive) technology, the creation of PLA bioplastics, in the form of lactic acid polymers from stale bread, applied in the bio-medical sector, agriculture but also for food packaging: a complete non-sense.

And what can we do?

First of all, we must stop being a model consumer, but for doing this we need the support of the bakers: if they continue to “sell good stuff”, it will certainly be difficult for many to fight temptation. With fewer choices, we would be forced to buy the leftover bread that we would never have chosen in the current circumstances.
If the urge to eat hot bread is a serious obsession, then we can take in consideration to produce our own home-made bread. Not only because learning how to make bread would give you an inner peace and a feeling of self-sufficiency like few other things in the world; but it would also stop drastically your bread wastes, you can’t easily throw away a piece of bread for which you have spent time and sweat, just because the crust is not “crunchy” anymore: we all know the saying “easy come, easy go”. Buying bread is so easy!

If you want to ‘change the side’, from being consumer to being producer, I have the perfect recipe to make a great bread.

But if you think that baking is too complicated you should start buying sourdough bread: maybe it’s not as tasty as the one made with brewer’s yeast, but its taste and texture are pleasant even after 3-4 days. So either you bake it yourself, or try to buy this type of bread: I assure you that your bread waste will decrease considerably.
And then we must know how to use the modern facilities that we have in our homes. Many would think of cold storage; but I’d suggest ‘very’ cold. While storing bread in the fridge, reducing its humidity, would make it become though before the expected time, if you use the freezer you can keep your bread more faithful to its original condition. Freezing a bread that is still fresh (just 8-10 hours from baking) will ensure that, once thawed and maybe toasted a bit, you will find the same fresh bread even after weeks; almost with the same organoleptic characteristics as when you baked it.
But despite all your attention, it may happen that some piece of bread may become very hard, stale. If they don’t present mold, you should consider yourself lucky; because that bread can become a surprisingly tasty meal with little effort.

Here you can find a list of experienced things for how to recycle stale bread in a very tasty way (without exaggeration you should know that there are dozens and dozens of things / recipes that can be done by using stale or ‘rocky’ bread):

– Toast it: you can simply heat it to bring back the memory of a crunchy bread outside and soft inside; if the situation is a bit “extreme”, just spray normal water on the sliced bread before baking it.

– Breadcrumbs: after cutting it into thin slices, toast the stale bread without burning it; once it is cold, grind it using a food processor in order to obtain the breadcrumbs to be used in many recipes. Wholemeal breadcrumbs are difficult to find in stores, by doing by myself I don’t have to use white floured breadcrumbs, and moreover in this way I can also personalize them by adding my favorite spices (like rosemary) and/or garlic, or onion.

– Croutons: if the ‘hardness’ of the bread does not yet make it a weapon, then you can cut it into small cubes and sauté it in a pan with a little oil, after a few minutes you will have your delicious croutons to be used to enrich your dishes. I remind you that some consumers absurdly ‘buy’ such products, which can be made at home with quality ingredients without paying nothing.

– Traditional recipes: you can make regional recipes, the truly traditional ones, powerful anti-waste for modern days. In fact, we forget too often that in the past only the rich could afford the dishes which today are passed off as traditional: for example in Italy lasagne, tortellini, fettuccine al ragù and so on were not the food for all, but instead some regional soups or patties like “pappa al pomodoro” (I think it is ubiquitous all over Italy), ribollita (from Tuscany), pancotto (typical of the south but in particular of Puglia), canederli (from Tyrol), panzanella were the real traditional recipes… I would like to remind you that the recipes for soups can also be used in summer with some tricks. Some example? Instead of cabbage or kale, you can use green beans or zucchini, and instead of fatty broths you can opt for aromatic but lighter ones.

– Meatballs: using stale bread you can make meatballs of … everything and more. If your bread is too hard even to cut it, you have to moisten it in a bowl with water or milk, then squeez it well of the excess of liquids and put together with some cunning ingredient (such as olives, nuts, raisins, cheese or other) with the help of egg or chia seeds, and then you can be able to create tasty and creative meatballs, for little and ‘big’ children.

– Use your imagination: when imagination flies free, you can use it in all recipes where water and flour are required; a tasty example is bread pizza: unlike what I suggested for meatballs, this time simply sprinkle water over the stale bread chunks; as soon as they are softened, put them into a pizza mould after having oiled them sufficiently; season to your preference (I’m crazy for the mix of tomato, garlic, olives, parmesan and oregano), bake at 180°C and after 20 minutes your “no waste” pizza will be ready to serve.

PLEASE NOTE. In virtue of good practice for a correct energy optimization, it is good to put these suggestions into action, when you have to use the oven for also other purposes.

Enjoy your recycled bread and good revolution to all

Article Name
Bread waste: let's see how to reduce it with some simple tricks
Description
Bread is the most wasted food in the world: here are some suggestions to reconcile ourselves with ethics, sustainability and... the budget
Author
Başak Bartu
Publisher Name
CHE Food Revolution
Publisher Logo

My name is Başak, food engineer with HACCP specialization. I research the balance of diets, according to their sustainability