Home » CHE recipes » Side dishes » Okra (Gumbo, Lady Fingers) recipe: how and why we should eat it

Okra (Gumbo, Lady Fingers) recipe: how and why we should eat it

Okra (or Ocra, Gumbo, Lady Fingers) recipe: how and why we should eat it 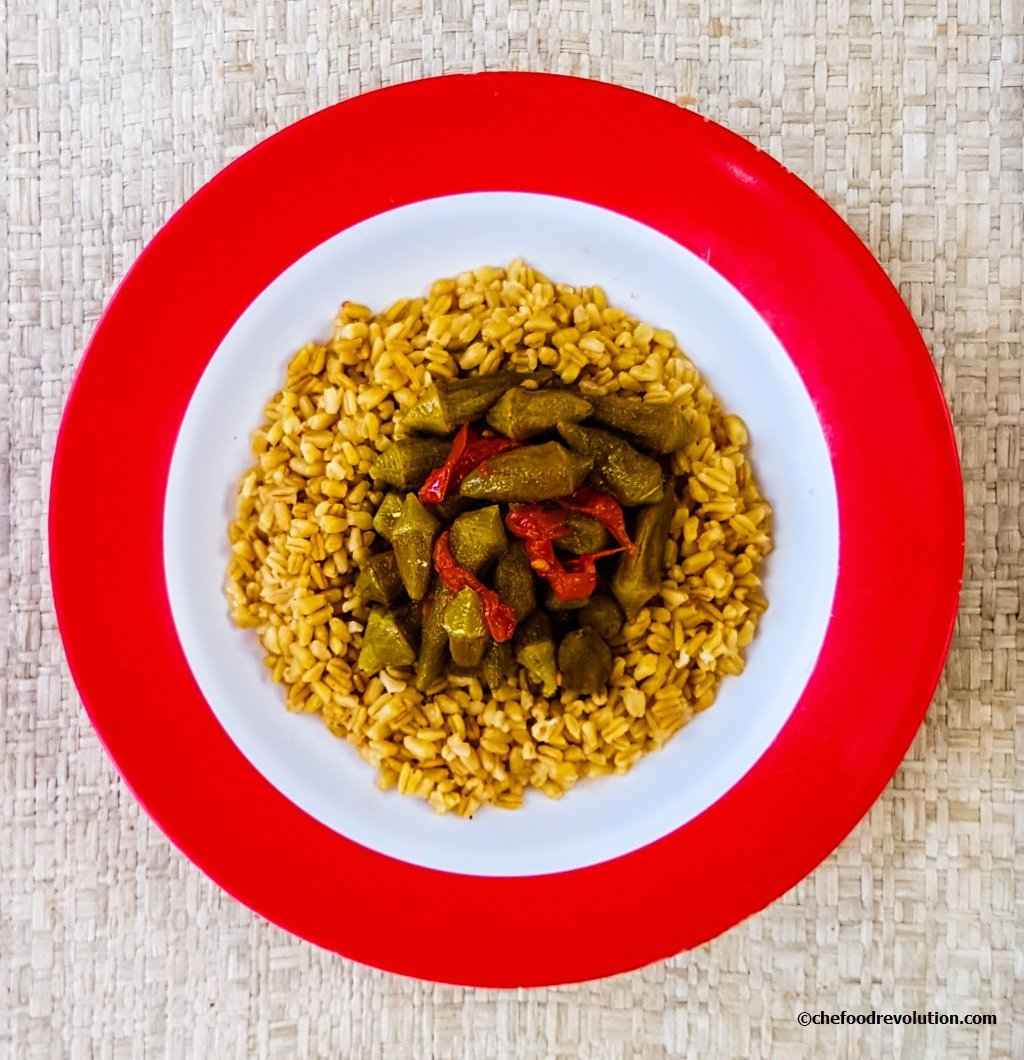 A tropical and sub-tropical plant of African origin that has been consumed for centuries in the poorest parts of the world, i.e. Brazil, India, Mexico and Africa: with the slave trade, the journey of the okra has extended to the southern states of North America. We also find it very frequently on the tables of the Turks and Greeks; shyly, in recent years, these “little pods” have been seen on many countries’ vegetable racks in supermarkets, but there should be much more of them.
The first thing I should tell you out of honesty is that okra, even if it can grow in most Mediterranean countries without any great difficulty and in spite of its beautiful flowers, it is not cultivated much, because it is not appreciated by everyone. The reason comes from the fact that it contains a gelatinous substance inside and if you don’t take some precautions while you prepare it, during cooking it is released into the sauce, giving the dish a slimy appearance. But wait, this does not mean that okra has to be eaten for necessity only, and although I find it a delicacy because maybe I grew up in Turkey appreciating it, but many people, including my husband who grew up without okra, eat it with a lot of pleasure.
Here you’re wondering, “but if there’s a good probability we don’t like it, then why should we eat it?” Believe me, after reading the following from a nutritional point of view, you will want to make up for all the lost time!
If you’re a fan of super food, you can’t miss eating okra, which is gaining great visibility in the list of functional foods. First of all, you need to know that precisely the substance responsible for its “slimness” is a health panacea: I am referring to mucilage. Mucilage is a compound that becomes gummy and gelatinous in the presence of water and is found in various types of plants (Malvaceae as in the case of okra, Tiliaceae, Orchidaceae, Mucoraceae etc.); it is also widely used by the pharmaceutical industry. In short, it is a true example of nutraceutical food.

Being able to offer a soothing action to the various inflammations concerning in particular the intestine and respiratory tract, in recent years several studies evaluate its use in nutraceutical formulations.

The mechanical characteristic of mucilage is that it absorbs a large amount of water by expanding, which helps to increase the volume of food mass in the gastric tract. In this way, various benefits are obtained:

– the walls of the stomach stretch out, increasing the sense of satiety and reducing appetite. I think it is already enough to convince those who want to limit the intake of calories.

– The increase in volume does not only concern the food to be digested, but also the ‘already digested’ food, which will be more voluminous; therefore this allows to facilitate the intestinal transit as a greater and softer faecal mass is generated. We can certainly say that okra, or rather mucilage, is useful in fighting constipation.

Moreover, the slimy but very functional mucilage has even more “miraculous” properties than those just mentioned: slowing down the digestive phase, it reduces the absorption of sugars. In other words, it reduces the risk of glycemic spikes and therefore those of insulin, becoming a valid ally in the fight against diabetes.

In addition, since the potential of absissic acid (ABA), a phytohormon with beneficial effects present in okra, has been discovered, we also find it in the formulations of nutraceuticals such as anti diabetes (1).

Furthermore, okra contains some of the vital components that regulate the activity of certain liver enzymes such as AST and ALP, which are very important for the correct functioning of the insulin system: this leads to an improvement in insulin resistance, reducing the risk of type 2 diabetes. However, diabetic patients who use metformin(2) based medicines should avoid taking okra as it may interfere with the correct absorption of the main active ingredients.

It may seem absurd to you, but the benefits of the placed aside and ignored okra continue: the mucilage present in okra, being able to bind to cholesterol during the digestive phase, helps to reduce the part of cholesterol otherwise can be absorbed, thus lowering its concentration in the blood.

It is very light, but at the same time nutritious: 100 grams of okra have only 30 kcal, but as much as 2 grams of protein (like 75 grams of yogurt)! This peculiarity should be emphasized, as many vegetables normally do not contain that much protein. If you are looking for plant based proteins to reduce the amount of animal origined food products in your diet, okra can be a happy discovery, as it also has an excellent amino acid content, and is rich in lysine and tryptophan. The high amount of dietary fiber, combined with the fact that it is free of saturated fat and cholesterol, paints a truly out-of-the-ordinary nutritional picture.

It is rich in Vitamin C, K, A and B9 (folic acid: very important for pregnant women or for women who plan to become pregnant); and also contains magnesium, calcium and zinc.

Finally, I can not fail to tell you that, in addition to everything just written, okra is a valuable source of powerful antioxidants, such as beta carotene, xanthine and lutein: very useful against free radicals. Their high concentration makes okra the vegetable with the highest levels of said antioxidants existing.

After having discovered how useful it can be for your health, I would like to share a very easy and equally delicate recipe to taste it in the best way: it is my mother’s recipe, the one I ask for every time I visit her; because even if it is only harvested in July and August, it can be frozen fresh once washed and cleaned, or after blanching it in water and lemon solution for a short while.

I hope you like it as much as I do.

In Turkey, the young and small pods are preferred, for two reasons: their young shell is able to keep the mucilage inside the okra for all the time of the cooking phase, and still do not present the “prickles”, at times real thorns in the most ripe specimens.
But if your supplier doesn’t have the baby okra, don’t worry, we have a solution to almost everything: you could clean the surface of the okra by rubbing it with a cloth, so as to remove those shaggy thorns.

For the mucilage, however, we have to implement more targeted tactics.

We have seen that this slimy substance is very useful for health in many ways, but that does not mean that we have to see it in our spoon. On the other hand, in order to have beneficial effects, it is sufficient that the okra contains it: aesthetically speaking, it is better kept inside.

To prevent it from spilling out during cooking, you could follow these recommendations below:

1) First of all, you need to know how to choose it: small okra has more resistant cell walls than finger-sized okra, which is why it is more efficient in retaining sticky matter inside. 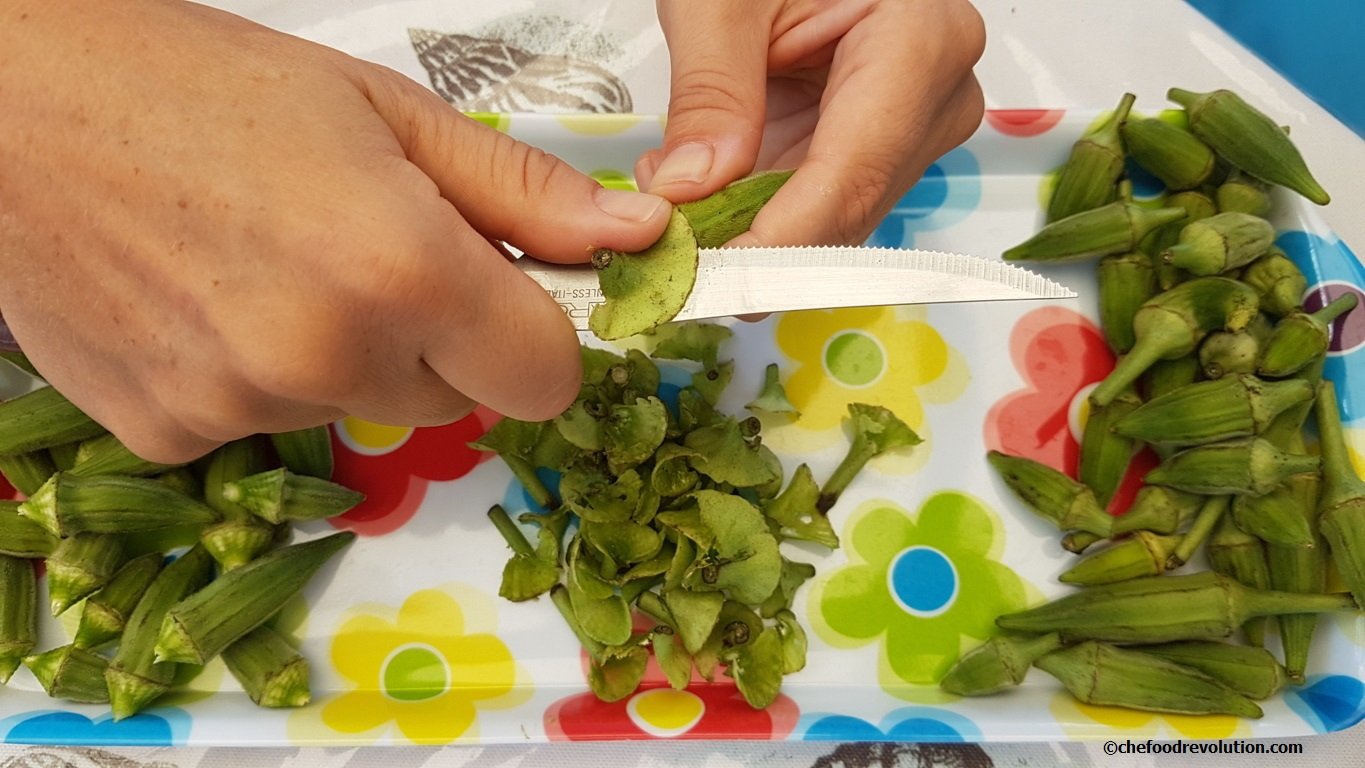 As you can see from the picture, for me who had the luck to choose the miniature ones, in 200 grams there are about 40-50 okra to tick, which means a lot of work. If you are not as lucky as I am to find the younger ones, rejoice in the numerical advantage in your favor and keep reading how to make up for it with some simply tricks.

2) As the mucilage begins to expand in the presence of water, the pods must be washed quickly under running water and immediately afterward dried thoroughly; this must be done before cutting them.

3) When cutting the tops, we should not cut them horizontally, but rather obliquely and superficially. This third trick is fundamental in order to keep the slimy part inside the pods.

4) After it has been washed, dried and cut we can cook it. Mom’s recipe is to use the juice of a lemon and tomato. The quantity is not only an organoleptic choice, it is used to create an acidic basis which in turn is useful to the okra in order not to release its precious, but not so aesthetic, content. For this purpose it is therefore useful to use acidic ingredients such as vinegar, lemon or even simply tomato.

5) In order to be successful in the realization of this recipe it is not necessary to overcook the okra: 5-10 minutes are more than enough. And for greater efficiency, choose a pot large enough not to crowd the okra.

6) In order not to stimulate the osmotic transit, it is advisable to salt the okra once the cooking is finished.

After having understood what to do and what to avoid, let’s move on to the preparation.

In a large pot, brown the onion dices with oil over low heat; add the garlic and after the onions have softened, add the ripe tomato cut into cubes, cook for another 3-4 minutes and add the hot water. When the sauce begins to boil add the lemon juice and the okra pods.

5-7 minutes of cooking will be enough if the okra is tender, otherwise you can extend it a few more minutes.

I think that okra prepared in this way – as a soup – is at its best, and if rice or bulgur were to accompany it, it would work even better. But you can also eat it by cutting the pods in two (lengthwise) and grilling them with fragrant herbs and breadcrumbs; or by sautéing them briefly in a pan, cut into slices, alone or with other vegetables.

Enjoy your healthy meal and good revolution to all