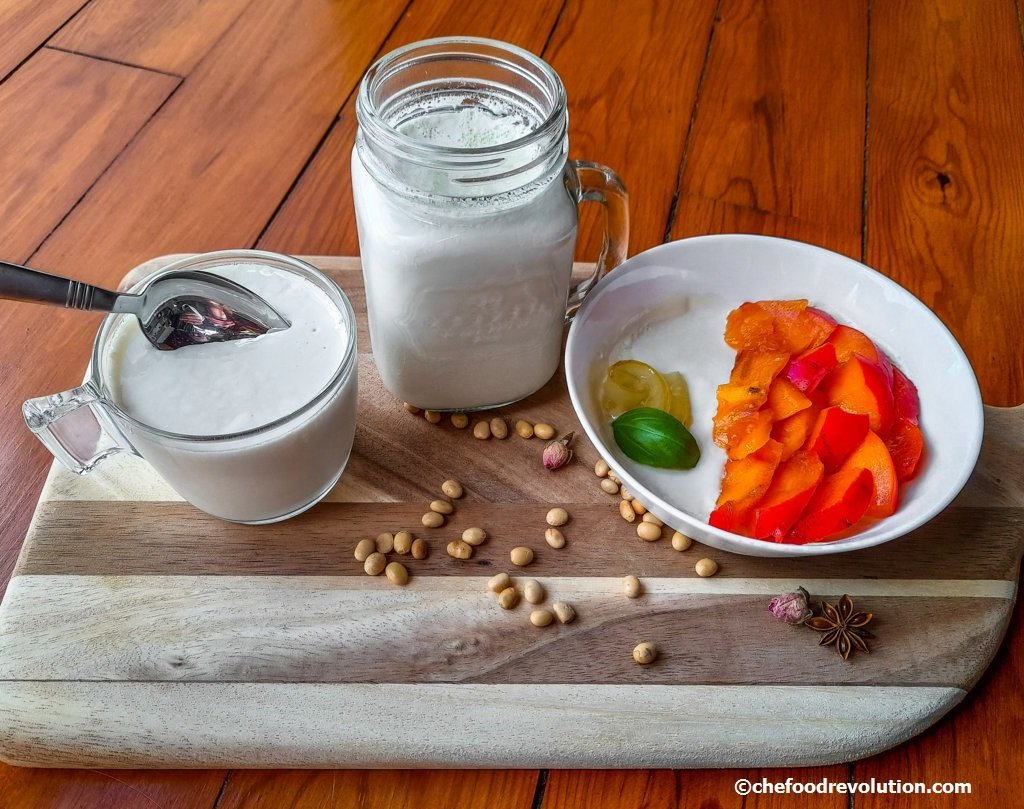 Every year, many people around the world, for a variety of reasons relating to health, ethics and the environment, try to replace cow’s milk with plant-based drinks.
The market is growing exponentially; so much so that according to some forecasts (Bloomberg Surveillance 2015) based on market analysis, it is assumed that turnover could exceed 26 billion dollars in 2023.
The so-called Soy Yogurt is just one of the food products derived from the world’s best-selling vegetable ‘milk’.

Healthy, ethical and yummy yes, but how much does it cost? Actually, soy yoghurt, especially if organic, can be very expensive: even over 7 euros per kilo, in the case of single portions; a choice that is certainly sustainable for animals and the planet, but sometimes not so sustainable for everyone’s pockets.
In this respect, homemade soy yogurt is immediately revolutionary: 7 euros against 2 euros (if you buy organic soya drink) or even about 1 euro if you make your own soya milk with soy beans (click here to read the tested recipe)!
Of course, self-production not only benefits the budget, but also the future of the planet: eliminating the plastic jars used for packaging is another gain for the environment; in fact, even if we do our best to recycle them properly, the industry itself still does not favour the choice, given its higher costs.

As you know, having Turkish origins, I like to define myself as a ‘keeper of the yoghurt tradition’ (here you can see the best recipe for classic yoghurt); therefore I am pleased to share with you the recipe for homemade soy yogurt, the result of several attempts made with or without the addition of sugar and/or thickeners; and using either lactic ferments or soy yoghurt already present as a starter.
I am very satisfied with the result, considering the absence of thickeners or additives; unlike commercial yogurts; the result is pleasantly thick, creamy and tangy at the right point.

As I explained in the article on plant-based proteins and as you can see from the comparison table above, soya drink can be a perfect substitute for cow’s milk. However, unprocessed soya products (such as milk or tofu etc.) contain substances called anti-nutrients, which have a negative effect on the bioavailability of proteins, but also of essential minerals such as calcium and iron.
And here’s the benefit of yoghurt: the lactic acid fermentation of the soya drink can reduce anti-nutrient content, improve the bioavailability of isoflavones and minerals present, moreover can also increase the level of B vitamins [2]. At the same time, fermentation reduces the taste of the bean, which is not very palatable to refined palates.

In this article I have discussed the importance of including probiotics in our nutrition: where to find the richest sources and the need to take prebiotic foods at the same time to ensure that probiotics last longer. Hear hear, soy, like milk, is a food with prebiotic characteristics.
So based on my experience and the scientific literature, I can safely say that soy yoghurt is also a good source of probiotics: their stability is said to be good and very similar to that of cow’s yoghurt [3].

There are two issues behind the scepticism towards store-bought or homemade soy yoghurt:

1 – Organoleptic choices: as a natural yoghurt worshipper that I am, I confess that it is not easy to get used to the taste of store-bought or homemade soy yoghurt; but gradually you get used to it, comforted by the ‘pleasure’ of reducing the intake of cow’s milk.

2 – Higher concentration of phytoestrogens (0.4-1300 mg/kg) [4]: this could be a problem for those suffering from endocrinological problems. However, it should be noted that neither the FDA nor the EFSA have expressed any opinion on setting a maximum level for consumption of yoghurt or soya drink. So I suggest only moderate consumption, as with any food product.

Research shows that regular use of yoghurt (also soy yoghurt) can have beneficial effects on the intestinal microbiota, teeth and skeleton; promote longevity and better ageing [5]. Regular consumption of yoghurt has also been associated with a reduced risk of gastrointestinal, inflammatory, cardiovascular and respiratory diseases, as well as allergies, obesity, osteoporosis or type 2 diabetes and metabolic syndromes in general [6, 7].

– 1 litre of unsweetened soy drink(better if organic): set aside 2 tablespoons to add to the starter (try to find a soy drink with at least 3 grams of protein and 2 grams of fat in 100 ml);
– 3 level tablespoons of homemade soy yoghurt, or store-bought (organic is better).

You will also need a well-washed steel pot and spoon, a sterilised container (or containers) for making the yoghurt and an oven!

Set aside 2 tablespoons of soy drink in a clean bowl and leave it at room temperature.
Put 3 tablespoons of soy yoghurt (always use clean spoons) in another bowl to use as a starter.
Bring the soy drink to the boil (above 72 degrees), and keep it at this temperature for about 15-20 minutes, stirring frequently (if not continuously) so that it doesn’t stick to the bottom of the pot; if you can’t stir continuously, leave a spoon placed diagonally in the pot to prevent the milk from spilling out.

Now you can let the soy drink cool down; to bring it to the optimum fermentation temperature (i.e. 43-45 degrees) you have two options:
1) put the pot (or the container you have chosen) inside a basin full of cold water;
2) wait for it to cool naturally (1 litre of milk takes about 15 minutes).

While you are waiting, mix in a bowl the starter (the homemade soy yoghurt to be used to start the coagulation) with 2-3 spoons of soy drink that you have kept aside at room temperature; let the yoghurt melt in a homogeneous way creating a sort of cream.
For fermentation I recommend using the oven, either on or off – it is always very useful for the most complicated part of the whole process.

As it is insulated, it allows the initial heat to be maintained, so with the following steps you can ferment homemade soya yogurt without turning it on, extending the duration of fermentation to 7-8 hours:
– you can leave only its lamp on, it will help to maintain the temperature;
– if turning on the lamp also starts the ventilation, then insert a container full of boiling water to be renewed every two hours;
– Otherwise, you can also cover the mixture of soy milk and starter with a kitchen cloth, then a blanket and leave for 7-8 hours.

To be sure of the result for 100%, you have to turn on the oven: but at a temperature of about 43-45 degrees; in this case fermentation will take 4-5 hours.
My advice is to turn on the oven in any case, whether you want to use it for its function or only as an insulated container: set it to 50 degrees (after which you can turn it off, if necessary); while it reaches the desired temperature (just a few minutes) add the starter with the soy drink, stirring it gently to distribute it evenly.

Here too you have two options
– use one container;
– several containers (glass jars are preferable): in this case I suggest you combine the “milk” with the starter in the pot (or other) and then with a ladle transfer the future yoghurt into the containers.

Without wasting time and trying to be as stable as possible, transfer the container(s) into the oven.
Once fermented (the milk will have become solid), you can let the yoghurt cool to room temperature (about 1 hour).
Finally, move it as gently as possible into the fridge, without a lid.
After a minimum of 12 hours (the more time passes, the firmer it becomes) you will have a perfect homemade soy yogurt. Only then should you close the container with the lid.

The homemade soy yogurt made with this recipe will keep for 10 days in the fridge. Serve it plain or wit fruit or other sweeteners

Enjoy your creation and good revolution to all