Turkish Bulgur pilaf: the original recipe of a healthy plate

Turkish Bulgur pilaf: the original recipe of a healthy plate 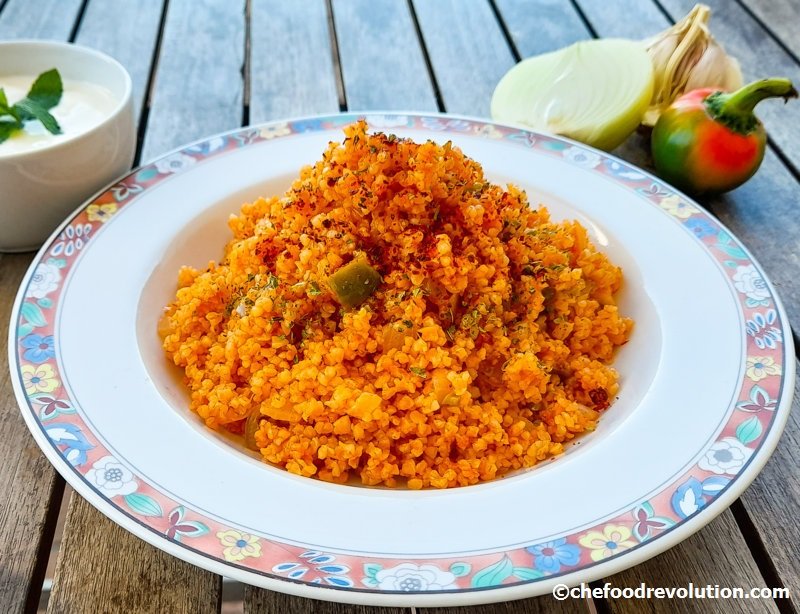 Bulgur is a wonderful ingredient with an excellent nutrient profile and high prebiotic properties that has a long history.
Its appearance on the gastronomic scenes dates back to the time of Genghis Khan, but some historians claim it existed and was even considered among the most important grains as early as 2800 BC in the Chinese empire.
However, the world generally associates it with Anatolian civilizations, where modern Turkey is located today.
I have already mentioned that bulgur is healthy and rich in nutrients, but I would also like to specify that it has been perhaps humankind’s the first processed food as we mean today[1]: durum wheat grains are cleaned, washed, sprouted, steamed, then dried and finally ground.
Although the root of the name bulgur is derived from the Persian barġul or burġul, with the not-too-fancy meaning of “coarsely ground grain,” in reality the Turkish term bulgur is the more widely used one: perhaps because 75 percent of the bulgur exported worldwide comes from Türkiye, which alone has a production capacity exceeding half a million tons annually[2].

And it may also be because in Türkiye there are more than 250 recipes using bulgur!
Among them precisely the Turkish bulgur pilaf… But when this is prepared following my mom’s recipe it seriously turns into something unique and inclusive: made with the humblest ingredients from the Mediterranean basin, it only takes advantage of the intense scents of vegetables with spices and their rich umami baggage, becoming a meal without lefting no one behind. So much so that for more than 60 years now bulgur has been one of the most featured grains in the supply lists of institutions who aim to guarantee food security (FAO etc.) to the poorest countries in the world.

As always, it is not only for the pleasure of the palate or for its affordability that I want to share a recipe with you; While I do not want to repeat what I have already written about bulgur in the recipe for kisir, Turkish-style bulgur salad, I believe it is important to advise you to include this cereal in your diet more frequently, even if you are wealthy, for the following reasons:

– because it is created from high-quality whole durum wheat, steamed, then dried and finally ground, it can be called the quintessential whole grain cereal; therefore very rich in minerals (potassium, iron and zinc) and dietary fiber. Especially its fiber content puts it at the top of the list of grains defined as healthier, such as quinoa, oats, millet, buckwheat, or corn;

– bulgur has a medium-low average glycemic index, a very important characteristic for people with diabetes;

– has a high folic acid content ranging from 41-150 µg/100g, depending on the variety; therefore, particularly useful food for pregnant women or those planning to have a child[3];

– has a longer shelf life than other grains, as fewer insects or pests are able to attack it, due to production processes[4];

– it has a lower concentration of phytic acid, again due to production processes (heat is used for cooking and drying); making it an ideal food for those leading a purely plant-based diet;

– and finally, dishes made with bulgur are very versatile and easy to prepare, since it is a precooked: ideal for use in salads, meatballs, stuffing, soups, or Turkish bulgur pilaf of course.

Which bulgur to use for an excellent Turkish bulgur pilaf?

Bulgur is found on average in two forms, depending on the degree of grinding: coarse or fine.
Smaller grains are ideal to use without cooking, simply soaking in boiling water is enough, as in the case of bulgur and red lentils meatballs, or bulgur salad like this one here; on the other hand, larger grains hold up better to long cooking, so they are preferred in the preparation of Turkish bulgur pilaf. But if you can find Einkorn bulgur which is an ancient type of wheat (Triticum monococcum) with more protein and less gluten, you will have the healthiest Turkish bulgur pilaf.

Where to buy bulgur

In big supermarkets or ethnic stores it is now easy to find, often in coarse form, which is exactly what you would need to prepare Turkish bulgur pilaf.

Start by heating the vegetable broth (or water).
While you crush one garlic and set it aside, cut the onion into small cubes, then the bell pepper into thin strips and the tomato again into small cubes.
Keep all the vegetables separate because since they have different cooking times, we will cook in a certain order.
In a pot, at least 30 cm wide and equipped with a lid, put the oil.
Start browning the onion and garlic over low heat.
When the onion starts to wilt a bit, turning a rosy color, add the thinly sliced peppers.
After about 2-3 minutes, add the tomato and bell pepper paste (if you have it) and let it go for another 2-3 minutes.
Then add the bulgur, salt and spices.
Stirring all the ingredients well, add the tomatoes cut into small cubes or grated.
After another 1-2 minutes always stirring, you are now ready to pour in the now boiling vegetable broth or water.
Now close the lid, reduce the heat to low and cook the Turkish bulgur pilaf following the cooking time directions on the package: cooking time may vary from brand to brand.
Normally 10 minutes from boiling is more than enough.
After the recommended minutes have elapsed, you should notice that the bulgur has absorbed all the water, forming some sort of craters on the surface: if so, turn off the heat and remove the lid, placing a kitchen towel over the pot.
After about 10 minutes of resting, when the cloth has absorbed some of the excess steam, creating distinct and separate grains, the Turkish bulgur pilaf is ready to be brought to the table.

Turkish bulgur pilaf is a complex carb rich great dish to pair with salads or vegetable side dishes such as purslane with yogurt, Turkish-style stuffed eggplant, or to accompany spice-rich main courses such as Turkish meatballs (kofte) or easy black bean stew.

Enjoy your meal and good revolution to you all