Home » Food Awareness » Can you eat expired yogurt? Learn also how to extend the shelf life

Can you eat expired yogurt? Learn also how to extend the shelf life

Can you eat expired yogurt? Learn also how to extend the shelf life 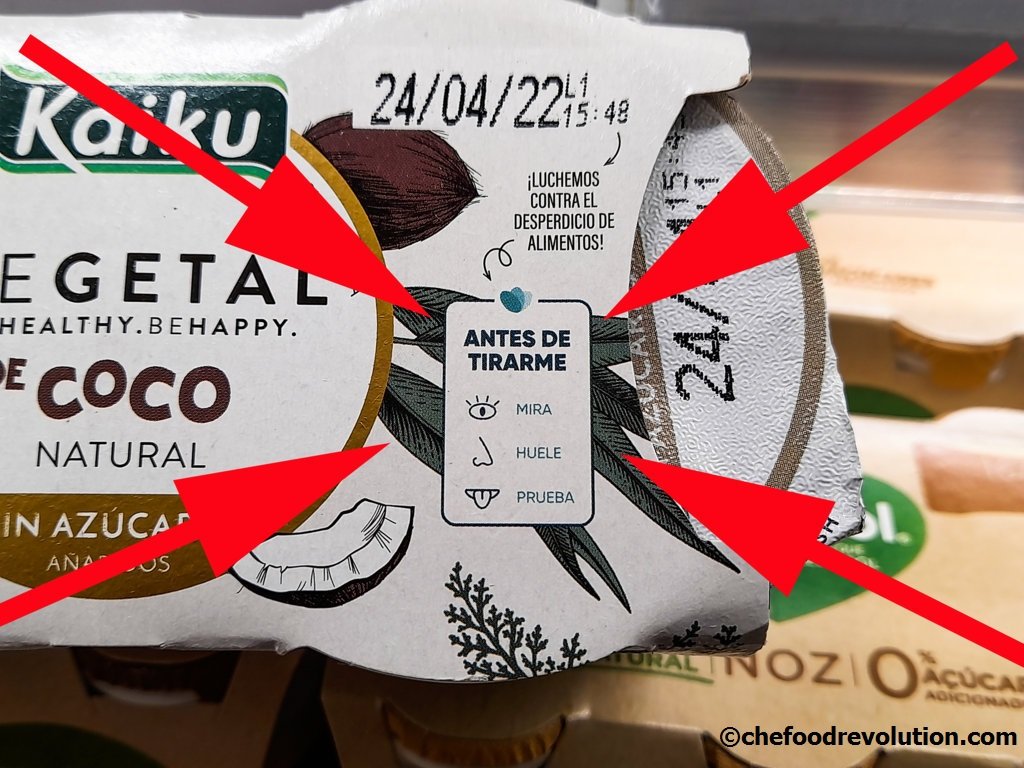 More and more people appreciate yogurt, both for its functional and healthy properties and for its taste and versatility.
The year 2020 in particular will go down in history for the increase in market volume: 130% compared to the previous year (in Italy)… Finally, a healthy trend!
Rich in calcium and phosphorus, yogurt (but also kefir or vegetable yogurt) is an excellent source of certain B vitamins and good levels of protein, in addition to its low fat and carbohydrate content. It is a probiotic, i.e. able to promote the well-being and growth of the intestinal microbiota, a valuable ally in strengthening the immune system.
Unfortunately, as the market grows, yogurt waste also goes hand in hand, and the question “can you eat expired yogurt?” becomes the new “summer hit”.

Yes, you can eat expired yogurt: after all, yogurt is a food that was consumed long before the invention of the refrigerator and the laboratories; and its main purpose was precisely to preserve milk for a long time without exterminating the population.

Indeed, although it is right to ensure consumer safety and hygiene, having become a slave to excessive ‘precaution’ has distanced us from the wisdom of the past – a wide-ranging topic that would require a separate article.

And now let’s deal with the subject in the manner we like, by going into it in depth.

But does the yogurt expire?

Yes, of course; but almost never on the same day as the date on the packaging.

I don’t recommend you try it, but there are those who claim to have eaten yogurt after 3-5 months following its expiry date and not having experienced any undesirable effects!

But now let’s get back to the scientific and tangible facts to find out the answer for “Can you eat expired yogurt”.
Let’s start by saying that the date on the packaging does not indicate the day on which the yogurt becomes a poison or dangerous to health: “Best before /Best by...” is totally different from “Use before...” which indicates the actual expiry date.
My primary school teacher always used to stress how important words are, but it is a pity that the word ‘best’ magically disappears when faced with the impact of numbers (the date) and is therefore often overlooked by too many people.
In Europe alone, around 1.5 million tonnes of yogurt and co. (yogurt, drinking yogurt, kefir etc) are thrown away [1] also because of this misinterpretation.
A local survey reveals that in Belgium 75% of the population does not know the difference between the two terms; in Greece in a similar survey, 56% of respondents believe that if the date indicated under the famous term is exceeded, a food should no longer be eaten; only the Germans are saved: 91% of respondents showed that they are familiar with the difference between the tricky labels [2]. The labeling of the TMC or Minimum Conservation Deadline required by the regulations becomes therefore very expensive for the planet, the economy and sustainability.
That’s why I would like all labels to bear the pictogram on the yogurt in the photograph: “check me with your eyes, nose and taste before you toss me”.

What is meant by the term “Best before” concerns the quality of the product, not its safety; it is a sort of written guarantee from the producer to the consumer: until that specific date, the product purchased will have ‘perfectly’ maintained its organoleptic characteristics such as taste, smell, color, texture and certainly its nutritional value.

– is intact and not bulging,
– has been stored correctly during all stages, from production to after-sales.

How can we tell if the cold chain has not been interrupted?
Easy, that’ s exactly the purpose of the above.

Then we need to check whether the yogurt has a strange color: I am referring to black or green spots; or yellowish or pinkish coloring on the surface.

If you don’t see anything unusual, move on to the second test, you should just sniff it: if it has a heavy smell, forget it and be more careful next time. You have no idea what a stench means? Believe me, your nose will know it very well: we are talking about an odor so strong that it will screw up your face!

Once this test has also been passed, we move on to tasting; here too, trust your tongue: it is normal to find a higher acidity (yogurt contains live organisms which increase its acidity); but not a bitter or sweetish taste (I am referring to natural yogurt) and/or any taste not associable to yogurt.

If you can eat expired yogurt, then why don’t they remove this label directly?
Good point.
However, when it comes to yogurt, there are also bureaucratic issues to take into account: for example, the identity and amount of bacteria present.
According to the Codex Alimentarius [3], in order to be called ‘yogurt’, a product obtained from the coagulation and fermentation of milk must necessarily contain live and healthy lactic acid bacteria (LAB).
Regardless of the country of production, the quantity of dominant Lactobacillus is strictly regulated: according to Codex, the standard quantity must not be less than 107 per gram (10 millions); for Australia, 106 per gram (1 million) is sufficient; in the USA and Europe, at least 108 per gram (100 millions) of live LAB are required.
As with all living beings, LAB also die; hence the sense of that best, that is to safeguard above all these technical requirements so that we can continue to call a certain product ‘yogurt’, or not.
To confirm this, various studies show that after the expiry date, the dominant and functional bacteria begin to die off profusely [4, 5, 6, 7].

So after the hypothetical expiry date, the yogurt does not become inedible, but probably just a little less functional.
Again, this is probably not a random word, as there is no certainty that the yogurt after the expiry date will not have any bacteria useful for health; it may just not be 100% compliant with its regulated identifying name.
In fact, according to a (not very recent) study by a famous French magazine, three weeks after ‘best before date’, the yogurts tested (48 pots) were found to contain slightly less LAB than required by law [8]. If you wish, you can also use it for cooking: the slightly sour yoghurt is ideal for preparing the legendary yoghurt soup (Yayla Çorbası).

Can you eat expired yogurt even if it is vegan?

Dear vegan friends, don’t worry: nothing changes with plant-based yogurts, and what we have said so far applies, including test conditions.

Have you ever tried to make soy yogurt at home? All you need is soy milk, lactic acid bacterias or old yogurt to use as a starter and a little time:
here is my tried and tested recipe

How to extend the shelf life of yogurt

As you will have realized by now, the date on the packaging is not a divine law and can be influenced positively or negatively by many factors.

Below is a list of tips on how to extend the best-before date:

– family packs (which are certainly preferable in order to protect your wallet and above all the environment) can speed up the arrival of the expiry date. Contact with air (oxygen) encourages the formation of mold, which is an aerobic organism; the only real competitor to yogurt bacteria because it is not afraid of acidity, unlike pathogenic bacteria.
Always close the pack very tightly to limit the migration of possible mold, circulating in the fridge (in modern fridges the action of the fan makes this phenomenon easier).
If you are unable to finish the yogurt pack within 4-5 days, create single portions in hermetically sealed containers and store them in the coldest part of the fridge.
Another typical family-size mistake is to consume the desired portion of yogurt without serving it in a plate/bowl.
Moreover, even the transfer phase must respect, if not the HACCP parameters, at least those of etiquette: use a clean spoon (not licked, of course) to avoid contaminating the yogurt with bacteria from the oral cavity, an environment in which LAB want to be sovereign.

– Sugar added or fruit yogurts are certainly tastier, but less likely to last long: I suggest you buy plain yogurt and add your fave ingredients once the portion has been served in the bowl;

In the presence of sugar, bacteria (LAB) are more lively, I would say too lively: they eat more, reproduce more, finish their ‘daily bread’ before time and produce metabolites in greater quantities, threatening their very existence.

In addition, managing sugar by ourselves makes it possible to control the amount of sugar, as commercial yogurts are often able to compete with the most unhealthy snacks!

– improper storage temperature negatively influences the expiry date of yogurt, as with all other foods.
Check periodically that the temperature of your fridge is necessarily below 8 degrees.
In any case, place your yogurt and other perishable foods close to the walls of the fridge or in the compartments indicated as cooler areas between 2 – 5 degrees (in the cheese compartment for example), helps to extend the expiry date, ensuring greater survival of the functional bacteria present [9].

– if you are already certain that you will not be able to finish your yogurt any time soon, opt for Greek or labneh yogurt (Lebanese strained yogurt); or strain yourself normal yogurt (read this recipe that does not involve failure): having less water and sugar (lactose), Greek (or strained) yogurt contains many more live colonies than normal yogurt, even after its ‘expiry’ date [10].
Similarly, skimmed yogurt lasts less than whole yogurt.

– The probiotic type of yogurt, uses probiotic bacteria, which are weaker and more demanding and do not last as long as their ordinary Lactobacillus cousins [11]; to get more benefits from them it is advisable consuming them before the best before date [12].

In conclusion, you can eat expired yogurt, but to limit eventual food waste, buy or prepare only as much as you are able to consume.

Happy revolution to you all

Article Name
Can you eat expired yogurt? Learn also how to extend the shelf life
Description
Expired yogurt, whether classic or vegan, can be eaten after its expiry date: but only after making some specific checks
Author
Başak Bartu
Publisher Name
CHE Food Revolution
Publisher Logo