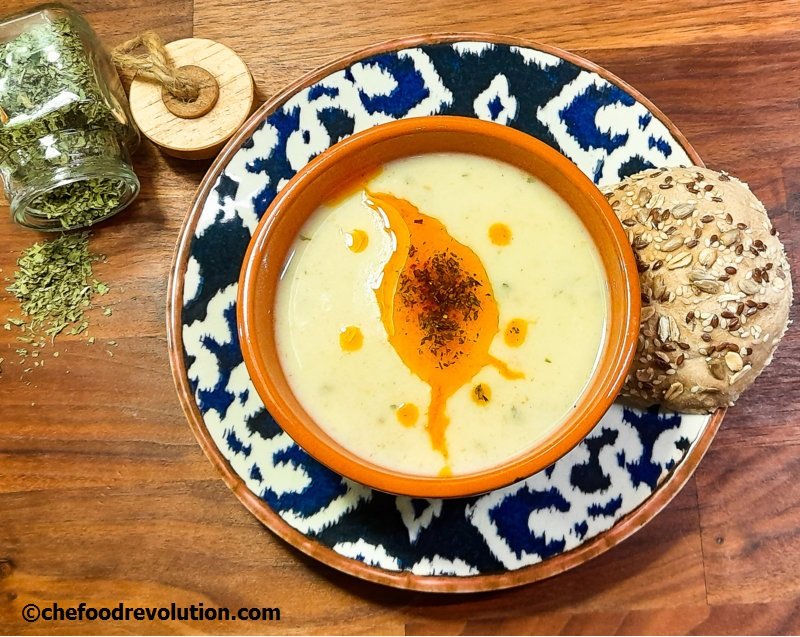 Yogurt soup is a recipe worth trying, especially if you are a soup lover and at the same time hate wasting food.
In fact, it seems designed to please those who wonder what to do with leftover rice and yogurt became slightly sour close to its expiry date!

FIND OUT HERE IF YOU CAN EAT EXPIRED YOGURT

How does yogurt soup taste?

I know, for the majority of people, yogurt is a sweet food to eat for breakfast or a snack… but if you are here it is obvious that you are not part of that majority.
It is true that on CHE Food Revolution I recommend recipes more for their sustainability or nutrient density; nevertheless, preparing cheap, healthy and ethical meals does not mean giving up taste. And this yogurt soup is no exception: whether prepared with leftovers or using the freshest ingredients.
Yogurt soup, or as it is called in its country of origin (Turkiye) Yoğurt or Yayla Çorbası (meaning highland meadow soup) is really scrumptious: and I am not saying this because I am fond of my mother’s recipe. This soup of humble origins, made from leftovers, is for the second time in a row among the top 20 best soups in the world, selected by CNN.

The name ‘highland meadow soup‘ comes from its inventors: the ancient, nomadic herdsmen of Mesopotamia used to move their herds to the highlands where the air was cooler and water and food plentiful.
Since yogurt had always been an essential food for the Turks, it was produced in large quantities; thanks also to the abundance of milk stimulated by those pure and wonderful places. Consequently, most probably partly to vary the diet and partly to get rid of the excess of yoghurt (which risked becoming even a little too sour for them: the yoghurt of those times was already quite sour by today’s standards, since it contained very strong strains of lactobacillus, able to consume milk sugars with great voracity), recipes based on yogurt were gradually invented.
The use of rice or wheat (the latter originally was the most readily available cereal) was another logical choice: to increase the satiating power of the yogurt soup, the addition of cereals was an excellent solution. The use of leftovers demonstrates the genuine good sense of ancient peoples: once upon a time, throwing food away was just not an option!
And so thanks to its goodness, ease and cheapness, yogurt soup soon had a way of spreading throughout the vast territory, even far beyond the highlands.

Which yogurt to use

To make yogurt soup you can choose plain white yogurt (no added sugar to be clear), bought fresh or close to its best-before date (for yogurt over the bbd, check the critical points explained here first). Opting for the second option is a 3-birds-with-one-stone story: you get a big discount (supermarkets discount products close to expiry date by 30 to 50 per cent), a tangible contribution to reducing food waste, and a slightly sour taste, just what you need for the original yogurt soup recipe.

It will be argued that yogurt close to its best-before date contains fewer beneficial bacteria; but since we have to cook it, they will all die at boiling temperature, regardless of the initial quantity.
However, as I always emphasis, if you knew how easy it is to make it at home, you would never want to buy yogurt again. Making it at home will cost you much less (even without discounts), it will have a higher quality (you can use organic milk, at the same price as a normal yoghurt), plus a smaller carbon footprint and it will taste much better and be thicker.

Curiosity: Why does yogurt become sour over time?

This nutritious, light and versatile food is very longevous (it has a long shelf life), but unfortunately it is not eternal.
When its incubation is a remote event (more than 2-3 weeks), the colony of microorganisms, responsible for the creation of yoghurt, changes: the metabolites of the primary bacteria (lactobacillus) increase the acidity of the yogurt while causing their own death; and the lack of rivalry thus opens the way for other microorganisms, such as yeasts and molds, to proliferate unconcerned about pH, as they are resistant to high acidity; in practice, they sanction the expiry date.
As long as the yogurt is always kept in the fridge and there are no stains or odd and/or colored spots on the surface, it can be consumed without health hazards; but since it will be a little more acidic than usual, using it in a recipe that calls for just that sourness is squaring the circle

Start by heating the vegetable stock (or water) in a small pot.
Meanwhile in a large saucepan, mix the flour and egg well with a hand whisk, trying to remove any lumps (note: do not put it on the heat yet).
Once a smooth mixture is obtained, add the yogurt and stir again to mix the ingredients well.
Finally, add the cooked brown rice.

And what if you don’t have any leftover rice? Then cook the brown rice according to the instructions on its packaging and use its cooking water to prepare the soup; needless to say, in this case you no longer need to heat any more water separately.

Now we have to combine the now hot water with the freshly prepared mixture; but we must pay attention to one small detail: to prevent the yogurt from coagulating (from 60°C proteins tend to coagulate, especially if there is a high acidity in the environment) we cannot mix these two liquids immediately.
To bring the mixture containing the yogurt to the boiling temperature, we will have to be patient and heat it up slowly. To do this, before turning on the cooker, add 1 ladle of hot water (from the first pot) into the pan with yogurt, stirring without ever stopping. Immediately afterward add another ladle of boiling water, exactly as before, without ever stopping.
You can now turn on the cooker. Slowly add all the hot water, continuing to stir until the yogurt soup starts to boil.
After boiling, lower the heat, stop stirring and cook for no more than 5 minutes.
A moment before turning off the heat, add salt and 1 teaspoon of mint.
When you have stopped stirring the soup (when it has started to boil), pour the evo oil and 1 teaspoon of mint and 1/2 teaspoon of chilli pepper into a small pan. Flavor the oil with the spices over a very low heat, which you will use to garnish the yogurt soup.
Pour a ladleful of soup into a bowl, and season with 1 tablespoon of the aromatic extra virgin olive oil.
Serve hot.

Yogurt soup is an excellent, light starter to warm up in winter, without weighing yourself down with empty calories.
However, you will be surprised how good it tastes even in summer, serving it chilled.
As the main dish, you can combine it with vegan mushroom and chickpea meatballs, or, to ‘stay local’, with some excellent Turkish meatballs (köfte); or why not, a delicious slice of farinata (Italian chickpea flatbread) to serve with vegetables.

Enjoy your heartwarming yogurt soup and good revolution to all