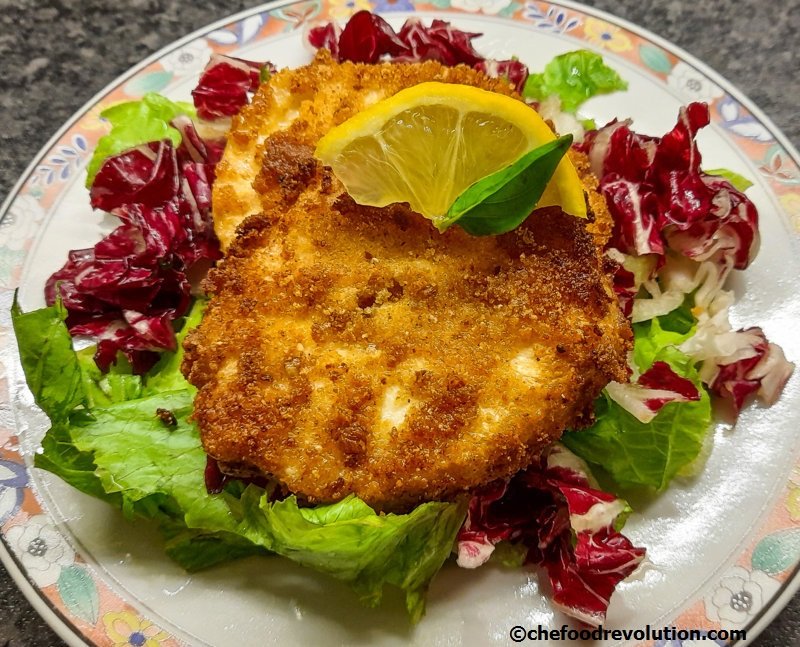 My special vegan celeriac schnitzel suggestion is surprisingly tasty and perhaps the most appealing way to consume celeriac: if you have already read the article entitled 5 tasty alternative salad ideas, you are familiar with it and may already love it.
I admit that this strange-looking root vegetable does not promise much at first glance; however, under that tough rind full of bumps, there is a very delicate taste, accompanied by a crisp and fresh texture when raw and velvety soft when cooked.
In case I have to explain its taste to someone who has never tasted it, I would say more along the lines of Jerusalem artichoke or parsnip, with a strong aftertaste of celery stalks.
Moreover there are also other reasons to choose celeriac: it has a long season (the best are found in the winter months); resists pest attacks and hot temperatures well; inexpensive; can be stored for up to 4 months in the refrigerator and very very versatile: beside using in salads, or as Vegan Celeriac Schnitzel covered in this article, it is excellent in replacing potatoes in recipes, both for its color and texture.
And there is more!

Celeriac is the ideal food for dieters: all fiber (despite being considered a low FOD-MAP food) and very few calories.
Yet to reduce it to such a superficial definition would be downright mean. Celeriac is rich in antioxidants, minerals (magnesium, calcium, phosphorus, potassium) and vitamins (Vitamin B6, C, K). Due to its high Vitamin K content (150g of celeriac provides 53% of male and 71% female requirements) it helps improve heart and bone health.

Given precisely its rich vitamin K content, it is not recommended for people using warfarin (Coumadin) or other anticoagulants. Similarly, in case it is recommended to limit the introduction of nitrates, it would be better to reduce the consumption of celeriac.

Wash the celeriac and, being very careful not to cut yourself, remove its skin.
Cut it into slices about 1cm high: try to be precise, as an unevenness could cause scorching in the fine parts, or leave the thick parts hard and uncooked.
Quickly wash the slices again and blanch them for 3-4 minutes inside a mixture of hot water and lemon juice, so as to avoid oxidation: precooking is not mandatory, although very useful in reducing the baking time.
After that, drain the slices and leave them to cool.
Now turn on the oven, setting it to 200°C.
Meanwhile, pour the wholewheat flour, breadcrumbs and soy milk into 3 separate containers.
Dip the slices, now cool, first in the flour, then in the soy milk and finally in the breadcrumbs.
Prepare a previously oiled baking sheet and place the vegan celeriac schnitzel to be baked on it.
With a kitchen brush, or an ad hoc spray, apply extra oil to the surface of the slices and bake them.
Bake first for 10 minutes, then take out the pan and turn the slices under over for a more even, crispy bake; finally bake them another 5 to 7 minutes, so as to give them a golden but not brown look.

For non-vegan celeriac schnitzel, replace soy milk for beaten egg. The rest of the steps are identical to the eggless (vegan) version.

Vegan celeriac schnitzel slices can also be fried (in oil).
Fry them for a total of 6-7 minutes, remembering to flip them after the first 3-4 minutes.
I tell you this as a friend and as an expert in healthy and economical cooking: baked ones are not less good than fried ones; on the contrary, besides being delicious, they are much healthier and cheaper.
Similarly if you have a hot air fryer at home use it without thinking twice.

Vegan celeriac schnitzels perfectly mimic classic schnitzels, both in appearance and texture; however, lacking the main ingredient (meat), they cannot be called a true main course (protein rich); therefore, I recommend pairing them with proteins (plant-based or not), thus bringing a complete meal to the table.
I suggest serving them with a legume salad or with a black bean and avocado cheesecake or even after a red lentil soup.

Enjoy your meal and have a good revolution